Where’s My Refuge? with Abel Selaocoe 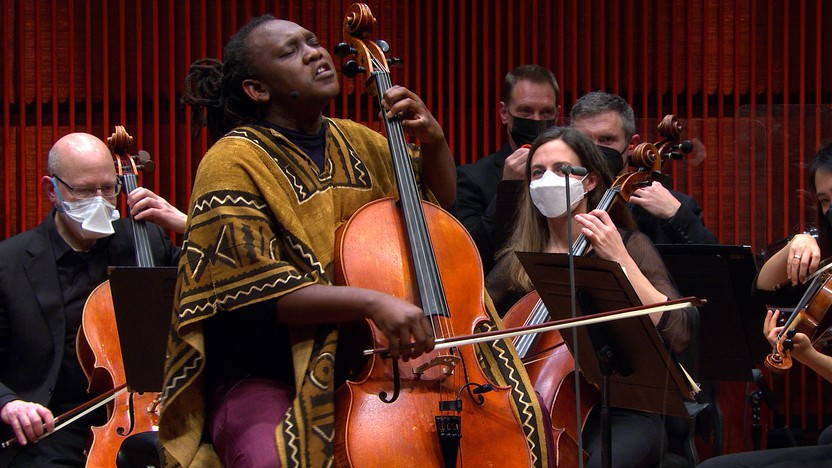 Franz Joseph Haydn became a court composer for Austria’s wealthy Esterhazy family in 1761, and four years later he was put in charge of all the court’s vast musical activities. His patron, Prince Nikolaus Esterhazy, was an avid musician and a true supporter of the arts, but he kept his Kapellmeister on a tight leash, especially during the long stretches of time spent at an isolated summer palace where the musicians had to produce an endless stream of operas and other entertainment. Under those demands, Haydn later wrote, “I was forced to become original.”

In 1779, Haydn negotiated a new contract that gave him more leeway to compose and publish independently, and soon his music was attracting followers throughout Europe. One foreign admirer was a young French count, Claude-François-Marie Rigolet, who commissioned six symphonies that Haydn composed in 1785 and 1786. These “Paris” Symphonies earned Haydn the handsome sum of 25 louis d’or each, plus additional fees for publication. (By comparison, Wolfgang Amadeus Mozart earned only 5 louis d’or for his “Paris” Symphony from 1778.) The Symphony No. 82, though published as the first in the sequence of the “Paris” Symphonies, was actually the last Haydn composed.

Haydn’s “Paris” symphonies capitalized on the large orchestra employed for the Concerts de la Loge Olympique, an ensemble that far outnumbered the private Esterhazy ensemble. It must have had quite an impact when the orchestra struck up the first performance of the Symphony No. 82 in 1787, conducted by its famous mixed-race maestro, Joseph Bologne, Chevalier de Saint-Georges. In the symphony’s first measures, the entire orchestra enters at a fortissimo dynamic, climbing up an arpeggio that defines the home key of C major. The timpani drums add potent force to the opening, repeating a rousing rat-a-tat-tat-tat rhythm. The secondary material, by contrast, enters with all bass instruments silenced except for a lone bassoon, creating an unusually airy texture and foreshadowing the droning bass of the symphony’s finale.

The second movement, an Allegretto, is quite quick and mischievous for a symphonic slow movement. Again there are gaps and delays in the bass line, as well as dramatic exchanges between loud and soft phrases. In the minuet, an oboe caps each stout phrase with a dainty solo, and isolated woodwinds have prominent roles in the contrasting trio section.

This symphony owes its nickname, “The Bear,” to the Vivace finale. The name was not Haydn’s choosing; it was added posthumously, as a reference to the rustic droning figure that appears throughout the movement. Apparently, this sound reminded audiences of the street music played on bagpipes and other folk instruments to accompany the dancing of tamed bears.

Qhawe (meaning “hero”) is dedicated to the desert — finding relief through rain — and Selaocoe’s nephew, whom he calls “the tonic to the family.” He continues: “When we are going through a hard time, we often ask for rain, in a call and response, asking and responding. We ask for relief from the struggle and for a savior from all our woes. My nephew brought life to the family through his birth, his joy and his strength.”

The inspiration for the music itself is threefold: a West African rhythm call called takanba, a dance performed by the Southern African Tswana people, and the church music heard in Selaocoe’s township. “People run around until they lose themselves,” Selaocoe says. “They dance with their feet.”

The Italian composer and cellist Giovanni Sollima strides across stylistic borders as frequently as he traverses the Atlantic in his busy career as a composer and orchestral soloist (and Silk Road Ensemble collaborator and Patti Smith sideman). He composed L.B. Files in 2005 and premiered it himself in Germany at the Kronberg Cello Festival, which dedicated that season to the cello legend Luigi Boccherini.

“I chose a simple narrative form,” Sollima wrote in a program note, “almost a micro-dramatization for a film or a story: the life of Boccherini, an Italian from Lucca (Tuscany) who emigrated to Spain and ended his days in absolute poverty. I like his unrestrained curiosity and his ability to adopt and mix contrasting forms, techniques and styles (from Flamenco to Zarzuela, from Fandango to the harsh sounds on the bridge of the cello, to bird imitations, etc.). L.B. Files is articulated into four dance movements (I’ve always seen him as a dancing cellist), and the Fandango is built on his original bassline. In the last movement I imagine that Boccherini returns, after a few hundred years, from Senegal.”

This song, written by Selaocoe, is dedicated to all mothers. “The woman holds the knife on the sharp end,” so go the lyrics — i.e. it is women who take the initiative and sacrifice themselves for us. “In the old days the father was the one going away to work, so it was our mothers that taught us to be men,” notes Selaocoe, who goes on to say that it is because we were guided by the strong hands of our mothers that we were able to grow. The lyrics go on: "It is so difficult to sow a seed, such is a woman from Africa.” According to Selaocoe, adversity is the soil from which we grow: “When we feel stifled we can become golden.”

Johann Sebastian Bach served as Kapellmeister to Prince Leopold of Cöthen from 1717 to 1723. Working in a secular position for a musically inclined patron, Bach concentrated more on instrumental music than at any other point in his career, and he produced such landmark works as the Brandenburg Concertos, the Sonatas and Partitas for solo violin, and the first book of the Well-Tempered Clavier. Bach probably composed his Six Cello Suites in Cöthen as well, likely before the solo violin set from 1720. Bach’s own manuscript has been lost, so the few reliable sources for the suites are surviving copies made during Bach’s life, including one in the hand of his second wife, Anna Magdalena.

South African cellist Abel Selaocoe makes his SPCO debut in a program that explores his musical roots and the parallel worlds of folk music from the African continent and the European classical tradition. Equally at home improvising on African folk songs and Baroque works from the 1700s, Selaocoe takes us on a musical journey for which he alone is a guide. He combines virtuosic performance with improvisation, singing and body percussion, seamlessly moving between a plethora of styles and traditions.