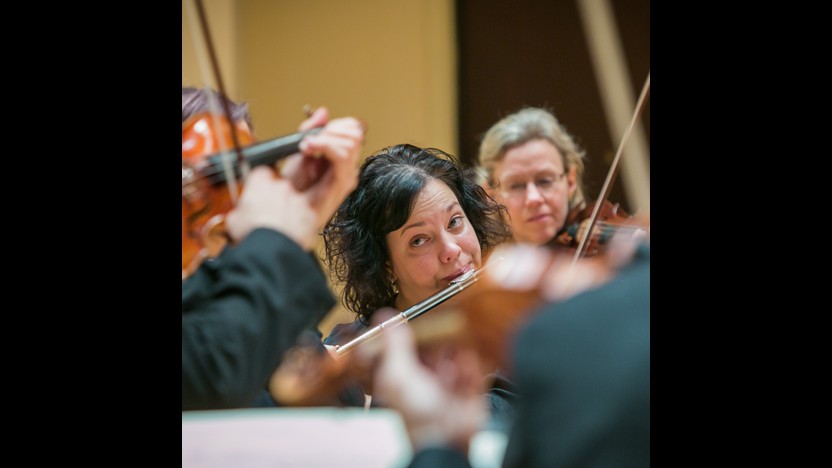 Handel dazzled British audiences with his dozens of operas in Italian, but his greatest spectacles were his English-language oratorios and odes. To help attract crowds to those performances, Handel assembled twelve concerti grossi, or “Grand Concertos,” in 1739. He introduced the new works during the intermissions, and also published them on subscription. The concertos came out in print as Handel’s Opus 6, the same opus number as Corelli’s popular concerto set, published 25 years earlier. Handel’s Opus 6 concertos also borrowed Corelli’s instrumentation: a solo group of two violins and cello, offset by full string sections and basso continuo. Handel later added two oboes to the accompanying ensemble for some of the concertos, including No. 5.

The Concerto Grosso in D major, Opus 6, No. 5, includes material from the Ode for St. Cecilia’s Day, which Handel had recently completed. Handel had no qualms repurposing his own music (or that of his contemporaries, for that matter), and so the three sections of the ode’s Overture reappeared as the first, second, and final movement of the six-part concerto grosso. The opening sequence borrows from the tradition of French overtures, starting with a slow introduction built from stately dotted rhythms and proceeding to a fast fugue. The flowing passages of the Presto third movement and the drawn-out melodic counterpoint of the Largo fourth movement showcase the wide range of expressive possibilities when the soloists split off from the full ensemble. The final two movements use tutti (“together”) textures throughout, first in an Allegro statement that chatters over a light-stepping bass line, and then closing with a courtly Menuet.

Matthias Georg Monn was active in Vienna in the pivotal period when Baroque style transitioned to the more streamlined galant sound, paving the way for the Classical aesthetic of Haydn and Mozart. Monn died young, before any of his music had been published, and his works have become jumbled with those of his brother, also a composer. Even his name is foggy; he is often listed with his first two names reversed, and his preferred spelling of Monn differed from the recorded family name of Mann.

One of the chief reasons Monn remains in circulation today is the attention he received from Arnold Schoenberg, during a period when the leader of the second great wave of Viennese composers was still obliged to work as a music editor to pay the bills. Schoenberg edited and transcribed several of Monn’s works, including the Cello Concerto in G Minor. This concerto became a favorite of the cellist Jacqueline du Pré, among other prominent soloists. (It should not be confused with a separate Monn keyboard concerto that Schoenberg transformed into a cello concerto for Pablo Casals, an exciting but thoroughly bastardized work.) This performance utilizes a newer and more historically accurate edition of Monn’s G-minor Concerto, prepared by Oliver Nagy.

The Allegro first movement has all the requisite components for a proto-classical concerto: a tutti exposition that establishes the home key, anchored by an ear-grabbing theme that leaps up through a G-minor arpeggio; a move to a contrasting key area, in this case the consoling calm of B-flat major; and ample opportunities for the soloist to expand upon these themes until the recapitulation resolves itself back to G minor.

The central Adagio movement is placid and pastoral, cast in a gently rocking triplet pulse. The brief cadential passages with snappy dotted rhythms and stout unison lines create a lively contrast to the otherwise gentle flow of the music. The fugue writing within the Allegro non tanto finale links this concerto to the preceding generations, but the virtuosic passagework and rich melodic writing for the cellist point forward to the Classical era and beyond.

Antonio Vivaldi took after his father in playing the violin, but “The Red Priest,” as the ginger-haired composer came to be called, trained for a life in the church instead of studying music. Ordained in 1703, Vivaldi took a job at a school for orphaned girls in Venice, where he taught them violin and, for a time, also performed mass. He was known in his day as a top-notch violinist, with less attention paid to his many compositions, spanning chamber music, opera, sacred music, and of course his concertos—more than 500 total, with at least 230 featuring the violin.

In the 1920s, an Italian scholar unearthed a trove of Vivaldi’s personal manuscripts that had been shelved for nearly 200 years. Among them were three concertos with the solo instrument labeled as “flautino,” an imprecise term simply indicating a “little flute.” It could have referred to the highest member of the transverse flute family—i.e. a forerunner of the modern piccolo, held sideways—but evidence in the score and common practice in the period point instead to the sopranino recorder, an instrument held vertically. Piccolo players have since adopted these seminal concertos, which lie perfectly in the range of their uniquely agile and brilliant instrument.

The exact circumstances that led Vivaldi to compose the Piccolo Concerto in A minor and its siblings remain unknown, but clearly he designed them for a very strong soloist. In the first solo episode of the opening Allegro movement, for example, the soloist plays nineteen demanding measures with only one eighth-rest and one sixteenth-rest of respite, until the main ritornello theme provides relief. The central Larghetto movement is more spacious, with the solo line riding over an unadorned line of walking accompaniment. The concerto saves its flashiest virtuosity for the Allegro finale, as the piccolo darts high above the accompaniment.

Charles Avison was a British composer, organist and writer who worked mainly in the northern city of Newcastle. As the director of a local concert series, he had first-hand experience with the English craze for concerti grossi, those group concertos developed in Italy by Corelli and imitated by Handel and many others. Avison capitalized on the trend in 1744 by publishing a set of 12 concertos modeled on Corelli’s template: a solo group consisting of two violins and cello, accompanied by a larger string ensemble and basso continuo. Instead of composing new material, Avison adapted sonatas by Domenico Scarlatti, whose popularity in England spiked after a major publication appeared in 1738. In merging Corelli’s ensemble structure with Scarlatti’s musical material, the relatively unknown Avison created a collection that easily surpassed his subscription target, and which remains active in the repertoire to this day.

The Concerto Grosso No. 1 in A Major draws from three different Scarlatti sonatas to stitch together the usual slow-fast-slow-fast structure of movements. Avison’s opening Adagio is not far off from the Grave treatment in Scarlatti’s original; the Amoroso third movement, on the other hand, is almost unrecognizable compared to the swift Allegro it borrows from. (There were not very many slow movements by Scarlatti in circulation at the time, so Avison had to get creative.) The concerto’s two Allegro movements maximize the counterpoint and textural contrast found within Scarlatti’s landmark keyboard sonatas.

After the violin, the instrument that appears most frequently as a concerto soloist in Vivaldi’s catalog is an unlikely choice: the bassoon. There are 39 surviving bassoon concertos (two of which are incomplete), with no clear explanation for their origin. Vivaldi dedicated one to a Venetian musician, and another to a Bohemian count, but there must also have been a worthy soloist at the Pietà, the school where Vivaldi worked at various times between 1703 and 1740. It might have been a fellow faculty member, or even some of the more talented young female students who gave Vivaldi reason to continue writing bassoon concertos.

The bassoon was in a transitional period in Vivaldi’s day. Its Renaissance-era precursor, the dulcian, was fading away, supplanted by the bassoons designed in the late 1600s in France and Germany. In the early 1700s, the bassoon’s usual role was to augment the bass line as part of the basso continuo group, along with the cello, bass, harpsichord, or any other number of bass instruments. It was rare for the bassoon to appear as a featured voice, all the more so in Italy. But Vivaldi’s writing demonstrates an intimate knowledge of the instrument’s expressive capabilities, from its growling bass notes to the smooth lyricism in its tenor range. He also understood how effectively the instrument could leap between ranges, as in a running passage in the Allegro poco first movement that demands a jump from the low E up more than two octaves to an F-natural above the staff.

The Andante slow movement uses the ensemble to establish a slow-moving melody, and then brings in the bassoon to elaborate with artfully slurred and arpeggiated phrases. The Allegro finale introduces a subdued side of the solo voice, with the bassoon initially teasing out a patient melody over more active violin accompaniment, but soon the concerto’s star dives into the work’s most swift and agile passages.

Vivaldi’s first two publications featured chamber music genres dominated by Arcangelo Corelli: trio sonatas (i. e., two violins with basso continuo) and violin sonatas. Vivaldi stood out more with his third publication, the collection of twelve concertos first published in Amsterdam in 1711 under the title L’estro armonico (“Harmonic inspiration”). The two-volume set collected concertos that Vivaldi had composed during his tenure teaching at the Pietà, works that variously featured one, two, or four solo violinists with orchestra. (With all those talented orphan girls under his tutelage, Vivaldi could write as many solo parts as he wished!)

The publication did much to advance Vivaldi’s reputation at home and abroad, and also to spread the northern Italian idea of concerto style, as opposed to Corelli’s Roman mold. One composer who paid close attention was Johann Sebastian Bach, who transcribed several of Vivaldi’s Opus 3 concertos. The Concerto No. 10 in B Minor for Four Violins, for example, re-emerged as Bach’s Concerto in A Minor for Four Harpsichords, BWV 1065.

This concerto employs Vivaldi’s typical three-movement structure of fast outer movements surrounding a slow movement. The solo voices appear in a range of inventive configurations, starting with a surprising first phrase that uses just two violins and a viola. In the first movement, there is rarely more than one soloist featured at a time, with the solo episodes distributed equitably among the four leaders.

The middle movement is particularly enigmatic, from its unstable first chord, through its ghostly Larghetto section built from intricate bowing patterns, to its unresolved closing that links to the finale. Only in this closing movement do the four soloists come together for virtuosic passages of call-and-response sparring.

This program highlights the enduring vivacity of these Baroque concertos as the SPCO’s own musicians take center stage to present concerti grossi by Handel and Avison, and concertos by Georg Matthias Monn and Vivaldi.