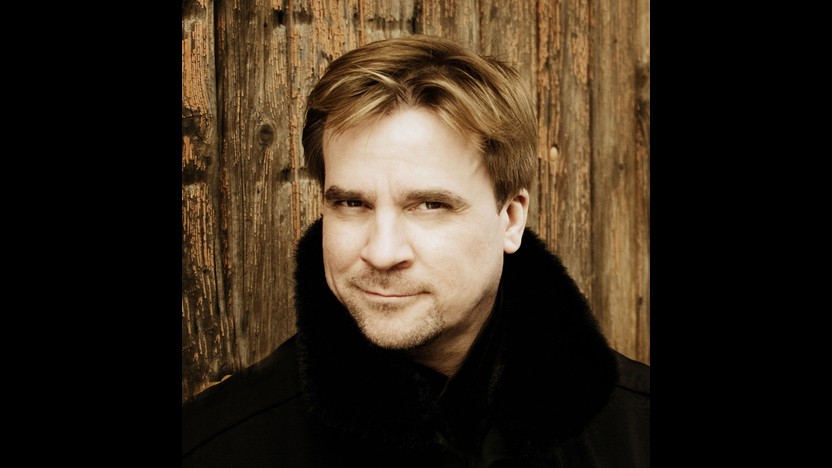 The Symbolist playwright Maurice Maeterlinck’s Pelléas et Mélisande received its first performance in May 1893 and met with instant success. The play, which tells the tale of the forbidden and ultimately ill-fated love of the title characters, was popular not only with the general public, but particularly among the European culturati. Within twelve years, Pelléas spawned significant works by no fewer than four of Western music’s most prominent composers. Gabriel Fauré composed incidental music (a score to accompany a performance of the play) in 1898. Claude Debussy followed in 1902 with his opera of the same title, which stands as the play’s most famous musical adaptation. Arnold Schoenberg’s tone poem on Pelléas, completed in 1903, offers a decidedly different from that of his French contemporaries. Finally, in 1905, the Finnish composer Jean Sibelius would undertake to provide his own suite of incidental music to Maeterlinck’s play.

Published as Sibelius’s Opus 46, Pelléas och Mélisande comprises a series of vivid vignettes. Designed to accompany a theatrical performance of the play, the suite is equally effective in concert performance, distilling the composer’s own reaction to the play into a purely abstract musical conception with a compelling narrative quality of its own.

Sibelius’s score begins “At the Castle Gate”: The grand, sweeping gestures of this opening serve as a spellbinding curtain raiser. A magisterial sequence of broadly spaced chords demonstrates Sibelius’s supremacy in the realm of orchestral music. (His seven symphonies, representing the spinal column of his oeuvre, stand alongside those of Mahler and Bruckner as the most significant of the post-Romantic era.) The massive orchestral sonority achieved in these opening measures is all the more remarkable considering Sibelius’s modest, chamber orchestra-sized scoring. Midway through this introduction, violin pizzicati animate the sustained chords in the winds and brass, evoking “the sun rising over the sea.”

The second movement, “Mélisande,” introduces one of Maeterlinck’s title characters with an English horn solo, to be played espressivo e semplice. A short but intensely vivid intermezzo, “At the Seashore,” follows, portraying still but troubled waters: rumbling dectuplets in the first violins amidst the stillness point the music towards a fortissimo outburst, which proceeds without pause to “A Spring in the Park.” This music, by contrast, is simple and lyrical—yet something peculiar lurks in the melody. (Note the strangely chilling effect of the simplest of gestures: a hit of the triangle on each downbeat.) That sense of something lying in wait beneath the surface is fulfilled by the sudden change in character at the movement’s midpoint, affected by dark harmonies in the low strings.

An ominous timpani roll begins the fifth movement, “The Three Blind Sisters,” prefacing another English horn solo. Pallid chords in the clarinets above an octave pedal in the horns follow—an ingeniously conceived representation, in musical terms, of blindness—soon accented by string pizzicati. The clarinets remain in the foreground in the sixth movement Pastorale, commencing a series of tranquil wind melodies, set above gossamer string textures.

“Mélisande at the Spinning Wheel” steeply heightens the drama. Whirling melodies and a nervous half-step tremolo in the violas depict, quite clearly, Mélisande’s spinning wheel. But this music suggests a psychological turbulence, contrary to the ostensibly mundane domesticity of the scene.

Sibelius provides Maeterlinck’s play with an Entr’acte of bright effervescence. Given its function in theatrical performance—as a second curtain-raiser, to be heard on its own rather than as soundtrack—this movement fittingly contains the suite’s most extroverted music. The suite’s final movement is its most substantial, and also its most poignant, portraying “The Death of Mélisande” with tragic gravitas.

Twentieth-century Swiss composer Frank Martin’s musical identity remains, four decades after his death, elusive. His compositional voice, while deeply personal, developed over an unusually long span, making it impossible to categorize him with any particular school or aesthetic, or even to draw comparisons with any of his contemporaries. Martin’s own words perhaps best capture the essence of his art: “Whatever the movements of the soul, the spirit, the sensibility that are manifested in one’s work, and whether the state is one of anguish or even despair, one’s art inevitably bears the sign of… this liberation, this sublimation which evokes in us a finished form, and which is, I think, what is called ‘beauty.’”

Martin’s Violin Concerto guides the listener through a richly varied emotive landscape, resulting, indeed, in a work of ravishing and intricate beauty. Its language is primarily tonal, though it was composed in a period when the musical elite regarded tonality as woefully passé. (Martin completed the Concerto in 1951, the year of Schoenberg’s death.) However, hold their noses though the avant-garde du jour might have, the work today retains an alluring freshness and piquancy. (In fact, over the course of his career, Martin did incorporate, among other influences—ranging from ancient music to Bach, Schumann, Chopin, and Franck, and even traditional Indian and Bulgarian music—Schoenberg’s twelve-tone technique into his compositional language. But his use of twelve-tone technique, as in, for example, his First Piano Concerto, Rhapsodie for five strings, and other works, never strictly follows that of Schoenberg, whose innovations Martin respected, but whose aesthetics he ultimately rejected.)

The Concerto’s first movement Allegro tranquillo begins with enchanting, dream-like music. Its puckish opening melody, scored for flutes, harp, and strings, seems to summon Mendelssohn’s A Midsummer Night’s Dream, but filtered through a twentieth-century sensibility. (As it happens, the Concerto’s aesthetic character derives from another Shakespearean tale; see below.) From the solo violin’s first entrance, the temperature steadily rises towards an extended, impassioned cadenza—after which, the sinewy, chromatic melody of the Concerto’s opening reappears, transfigured: slowed to half-tempo, and set in the strings alone, sans flute and harp. It is as though the blood has drained from the movement’s face, as the violin intones its final utterance.

The enigmatic mood that ends the Allegro tranquillo carries over into the second movement. Martin sets an inscrutable melody, like weird plainchant, to the plangent palette of oboes, bassoons, and cellos in octaves, accented by the harp. The solo violin writing here is marked by a parlando rhetorical quality; the soloist engages in fragments of dialogue with different groups of instruments in turn. A march of steady, assertive eighth notes, outlining a wildly disjunct melodic contour, signals the movement’s climax; as this music subsides, a specter of the first movement appears. Fragments of the Concerto’s sinewy opening melody—barely recognizable, but for its setting in flutes, harp, and strings—stagger towards the movement’s quiet final measures, marked perdendosi (dying away).

The Concerto’s Presto finale is at once lithe and muscular, conjuring the image of a dancer’s lean physique. A persistent, repeated staccato sixteenth-note figure triggers the Concerto’s most extroverted music, impelling the music inexorably to its cinematic ending.

Martin composed his Violin Concerto for Hansheinz Schneeberger, a leading virtuoso of his day, who also premiered Béla Bartók’s First Concerto. On the occasion of the work’s premiere, Martin offered the following introduction:

I would gladly continue to enlarge on the merits of the Basle Chamber Orchestra and its conductor rather than talk about my concerto. Indeed, there is not much to say about the piece beyond what is already contained and designated in its title. In fact I used every effort within my powers to write a proper concerto in three distinct parts—Allegro, Andante, Presto. It was to be a symphonic piece, but one led and inspired by a solo instrument, while serving to place on display the idiomatic qualities of the instrument and its player. This is nothing very new, of course, but it did not prevent some of these exigencies from seeming at times strangely contradictory to the composer. If I have adopted the traditional shape of the concerto, it was not from vain solicitude for neoclassicism, whatever that might mean. It is simply that I wanted to write a quite large and elaborate work (roughly half an hour of music), and I quickly realized that the classical shape of the concerto meets certain prerequisites of the genre; for example, there must be tuttis contrasting with solo passages in order for the orchestra to deploy its full strength at times and in order for the soloist to reenter to advantage. Similarly, the three-movement design is not in itself arbitrary, any more than the linking of the second and the third movements was imposed upon me against my original wish.

I began my Violin Concerto immediately after finishing the Cinqs Chansons d’Ariel (for mixed a cappella chorus after Shakespeare’s The Tempest). It therefore retained, especially at the opening, the same mysterious and slightly elfin atmosphere; it even borrows from it a motif introduced by the horns in bar 16. Other elements of a more lyrical, even pathetic character intervene, but the figure of Ariel always reappears in fresh guise, mysteriously distant at the end of the first movement and the entrance of the violin in the second, or sprightly and whimsical as at the opening of the finale. Yet there is nothing contrived about this: I simply remained slightly enchanted by the delights of Prospero’s isle.

The Fifth Symphony comes from the heart of Beethoven’s “middle” period, a phase when his encroaching deafness changed his relationship to composing and performing, and when the crystalline classicism of his early works gave way to a more focused and concentrated manner of writing. Rather than issuing flowing melodies, Beethoven’s quintessential works from this period build highly integrated forms out of compact, elemental materials.

The most famous musical nugget Beethoven ever conceived — perhaps the most recognizable motive ever penned by a composer — comes at the start of the Fifth Symphony, when the orchestra delivers four unadorned notes: three short repetitions of G dropping to a sustained E-flat, representing two notes from the home triad of C minor. This one motive fuels the entire first movement based in Beethoven’s favorite key for stormy and fateful music, and traces of it return later in the symphony.

The second movement features a double set of variations, alternating the development of two contrasting themes. Some of the accompanying rhythms echo the short-short-short-long rhythmic pattern from the first movement, contributing to the symphony’s organic cohesion.

The Scherzo retreads the central tonal conflict of the work, juxtaposing a moody first theme in C minor and a spry fugal section in C major. A coda builds tension that releases directly into the triumphant finale, anchoring the redemptive new key of C major with the added brilliance of piccolo a

Heralded as “one of the great Sibelians of our day,” (The Telegraph) conductor John Storgårds returns to the podium to lead the SPCO in a performance of Sibelius’s stately Pelléas and Mélisande. Baiba Skride makes her SPCO debut with Swiss composer Frank Martin’s Violin Concerto. Skride has been praised for playing with “panache and with a release of wonders of emotion, subtlety and virtuosity” (Ouest France). The program closes with Beethoven’s unyieldingly powerful Fifth Symphony.

Metro Transit is pleased to offer free rides to all October SPCO concerts. If you have tickets to October concerts, watch your email for a concert reminder including a link to download your free Metro Transit pass.