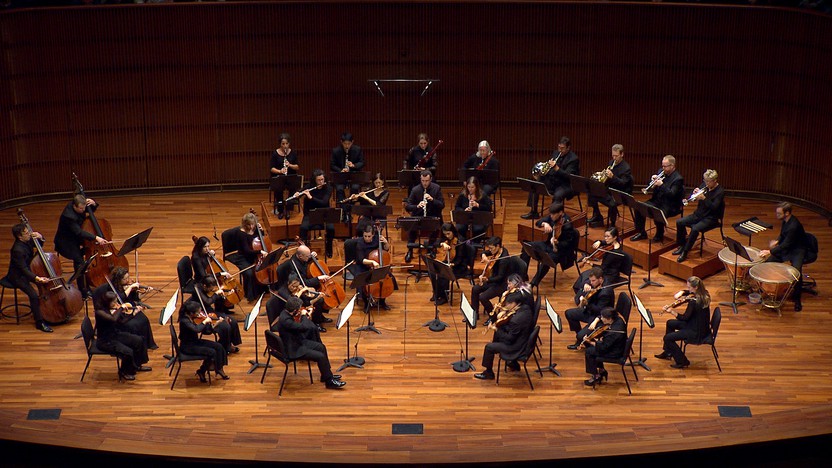 Rewind my life a bit and you might find a particular week in 2003 when I was researching the art of Italian Futurist Giacomo Balla for a term paper, watching my roommates play a car racing video game called Gran Turismo and thinking about the legacy of baroque string virtuosity as a point of departure for my next project. It didn’t take long before I felt the resonances between these different activities, and it was out of their unexpected convergence that this piece was born.

Gran Turismo is dedicated to the students of Robert Lipsett, who premiered the work at USC and have since performed it extensively. It is the recipient of the 2005 Leo Kaplan Prize from ASCAP.

After the death of his mentor and champion Robert Schumann in 1856, Brahms did not publish any music for the next four years, and he performed only sporadically at the piano. While supporting himself by teaching and conducting, he labored over a piano concerto that he would dedicate to Clara Schumann, studied counterpoint and other musical styles of the past, and challenged himself to experiment in new forms. Each year from 1857 to 1859, he spent a few months conducting a choir and offering piano lessons in Detmold, Germany; it was there that he wrote two serenades, using as his guide the classical-era tradition of lighthearted music for evening gatherings. The Serenade No. 1 in D Major (1857-58) existed in a version for nine players, until Brahms expanded the scoring to chamber orchestra in 1860. The Serenade No. 2 in A Major (1858-59) also used less than a full orchestral complement, omitting violins.

The serenades were important laboratories for Brahms. Free of the gravitas of symphonies (a form that flummoxed him for decades) but extending beyond the small-scale comfort zone of solo piano music and songs (genres that dominated his early output), these fruitful trials in large-ensemble writing brought forward the full potential that Schumann had seen years earlier.

The Serenade No. 2 owes much of its personality to its instrumentation. Removing the violins clears more space for the transparent and breezy woodwind choir, and it also allows the violas to occupy wider sonic territory. The orchestration emphasizes the connection to the outdoor bands associated with Classical serenades, and much of the musical material has an antique patina, as in the simple chorale that begins the work.

Brahms’ reckoning with the past also fuels the three central movements. A tidy Scherzo opens into an unexpectedly broad and luminous Trio section; the somber, Baroque-tinged opening of the Adagio non troppo provides the raw material for a lush and haunting core; the Quasi menuetto balances naïve dance music (perhaps the measured steps of someone learning to dance) with a contrasting section that builds a halting melody. The Rondo finale has something of a hunting character in the style of Haydn, adding a piccolo to contribute extra brightness and shimmer.

Ludwig van Beethoven, born into a musical family in the German city of Bonn, left his hometown for Vienna in November of 1792, at the age of 21. The aim of the trip, as his patron Count Ferdinand von Waldstein famously put it, was for the young composer to “receive Mozart’s spirit from Haydn’s hands.” The Elector of Bonn had released Beethoven from his performing and composing duties, with the expectation that he would study for a time with Haydn and then return to serve the court that had employed three generations of the Beethoven family.

Beethoven did study with Haydn, working mainly on counterpoint, but their short-lived tutelage ended when Haydn accepted an offer to spend a season in London, at which point he passed Beethoven off to another teacher. Beethoven’s period of study with Haydn had only a modest impact on his composing, but his chance to test the waters in the Vienna proved life-altering. Filling a void left by Mozart’s death in 1791, Beethoven was able to establish himself as the city’s premier keyboard virtuoso and improviser. He cut his ties with Bonn and pieced together enough work to embark on a freelance career.

Early on, Beethoven shied away from Haydn’s two signature genres: the symphony and the string quartet. Beethoven finally wrote his first quartets, a set of six grouped as Opus 18, between 1798 and 1800. As for symphonies, Beethoven made an attempt in 1795-96 (after hearing Haydn’s London Symphonies), but he did not complete one until 1800. He debuted the work on April 2 on his first benefit concert at the Burgtheater, the same venue where Mozart had presented his own popular concert series.

Beethoven’s First Symphony honors the Viennese tradition of Haydn and Mozart, and yet it also contains a germ of independence. The most striking departure comes in the very first sonority, an unstable chord that resolves away from the home key and only cycles back to the proper tonal center of C major after a drawn-out, tantalizing introduction. When the main theme enters in the new Allegro con brio tempo, it plays with a figure that repeatedly confirms the proper home key, as if to brush away the initial uncertainty.

In a sign of the interconnectivity that distinguishes all of Beethoven’s symphonies, the second movement starts with the same ascending interval (a perfect fourth) that was so central in the first movement. A distinguishing characteristic of this slow movement is its rich and independent writing for winds, with a scoring that includes trumpets and timpani.

The third movement, though labeled a minuet, is closer in spirit to the wild scherzos of the later symphonies. The contrasting trio section showcases Beethoven’s keen sense of humor, with scampering runs in the strings popping up between chorale phrases in the woodwinds. The finale brings this fledgling symphony full circle with another slow introduction. The violins test an ascending scale, adding a note at a time; when they reach the top of the octave, they launch a bright and hearty valediction.

Painter Giacomo Balla, Baroque string virtuosity and the video game Gran Turismo converged as seemingly disparate influences in Andrew Norman’s energetic Gran Turismo. Serenade No. 2 provided contrast to the Norman and showed Johannes Brahms in one of his first attempts at symphonic composition. Mozart and Haydn’s influence on Beethoven were put on full display with his First Symphony — a vital early work in his compositional development — to bring this program to a thrilling close.