Brahms and Bartók with Tabea Zimmermann 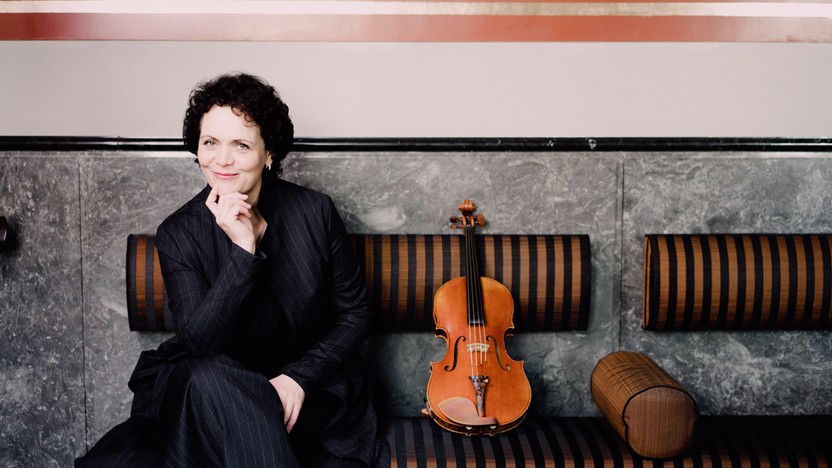 The Hungarian violinist and composer Ödön Pártos completed his formal education by the age of 17, including composition studies with Kodály, and soon he outgrew his native Budapest and embarked on a solo career based in Germany. As a prominent Jewish musician, his situation was untenable once the Nazis took power, and he left for Budapest, then the USSR, and ultimately Palestine in 1938, where he was recruited to lead the viola section of the Palestine Symphony Orchestra. His portfolio grew to include playing viola in the Israel Quartet and directing the Israel Academy of Music, making him one of the most influential performers and teachers in the nation’s first decades.

Pártos composed Yiskor in 1947 as a memorial for victims of the Holocaust. The Hebrew title means “remember,” and it is also the first word of a special prayer of mourning that is recited in the temple on four significant dates in the worship calendar. The solo viola part (originally played by Pártos himself) channels the musical traditions of Ashkenazi Jews from Eastern Europe, including the Jewish population in Pártos’ native Hungary that was devastated in the Holocaust.

By 1939, Béla Bartók’s life in Hungary was crumbling around him, especially after the Nazis seized his publisher in Vienna, but he felt bound to stay in Europe to care for his gravely ill mother. It was a much-needed relief then when the fabulously wealthy Swiss conductor and patron Paul Sacher commissioned a new piece for his chamber orchestra, an offer that came with the use of a vacation house in Switzerland. Bartók spent fifteen days that summer avoiding newspapers and composing the Divertimento for strings.

The Divertimento’s title and carefree attitude align with Wolfgang Amadeus Mozart, who elevated his era’s preferred form of party music to new levels of sophistication. In another historical nod, the scoring honors the Baroque concerto grosso tradition, in which individual voices emerge from the larger string orchestra to create contrasting colors and densities of sound. The themes themselves are quintessential Bartók, steeped in the folksongs of his native Hungary and chiseled into telltale fragments with an uncanny sense of symmetry and order.

Contrasting the rustic cheer of the first movement, the Molto adagio middle movement circulates from smooth, pacing lines into a swirling cloud of trills before dissipating for a quiet conclusion. The Allegro assai finale returns to fun and games in the form of call-and-response melodies, sudden interruptions, and a plethora of string effects, all capped with a manic sprint.

Johannes Brahms wanted desperately to live up to the promise his late mentor Robert Schumann had seen in him as a budding master of the orchestra, but first, the young composer had to find a way to make his reverence for the music of the past an asset, rather than an obstacle. The shadow that darkened his path most frighteningly was that of Ludwig van Beethoven, and it was not until he was in his forties that Brahms found his footing with two of Beethoven’s signature genres, symphonies and string quartets.

At a time when the path to immortality was far from certain for Brahms, a series of experiments with larger forms provided a crucial way forward. Between 1857 and 1859 he drafted two Serenades rooted in the type of casual evening entertainment adored in Wolfgang Amadeus Mozart’s Austria, which allowed for a detour around the serious implications of the symphony. The First Serenade began in a compact form as a nonet for winds and strings, and the Second Serenade emerged a year later with a limited scoring of its own that omitted violins from the standard string complement. That instrumentation shaped the piece’s personality, emphasizing the woodwind choir (and its outdoor associations stretching back to Mozart’s time), as heard in the simple chorale that begins the work.

Brahms’ reckoning with the past also fuels the three central movements. A tidy Scherzo opens into an unexpectedly broad and luminous trio section; the somber, Baroque-tinged opening of the Adagio non troppo provides the raw material for a lush and haunting core; the Quasi menuetto balances naïve dance music (perhaps the measured steps of someone learning to dance) with a contrasting section that builds a halting melody. The Rondo finale has something of a hunting character in the style of Haydn, adding a piccolo to contribute extra brightness and shimmer.

Newly appointed Artistic Partner Tabea Zimmermann begins her tenure with a hauntingly beautiful remembrance by Israeli violist and composer Ödön Pártos. A 20th century masterpiece, Béla Bartók’s Divertimento for String Orchestra was composed to evoke the lightness of 18th century works by Joseph Haydn and Wolfgang Amadeus Mozart, but it was written under the shadow of the coming war in Europe. Finally, Johannes Brahms' Serenade No. 2 is an early orchestral work dedicated to the object of his lifelong unrequited love, Clara Schumann.