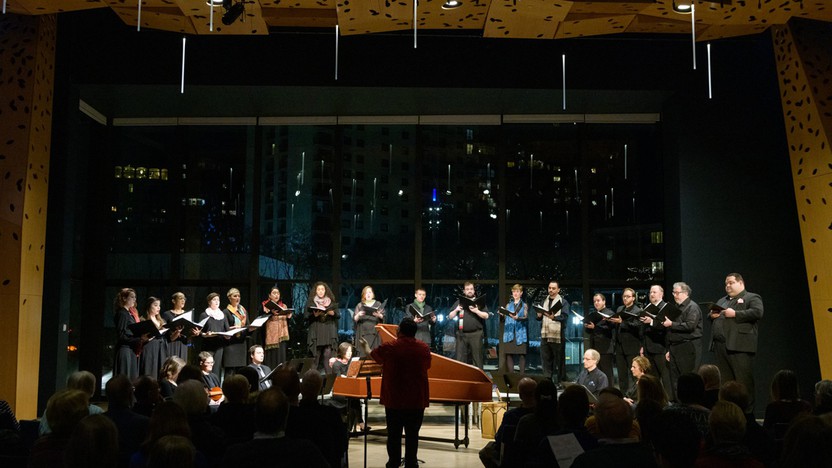 Johann Sebastian Bach spent most of his professional life in church positions, responsible for composing sacred music for weekly services and special events. One of the few periods in which Bach focused on secular music began in 1717 with his move from Weimar to the liberal, open-minded court of Prince Leopold of Anhalt-Cöthen, who gave Bach both the freedom to explore instrumental forms and a talented ensemble to perform new works. Compositions from this period include the “Brandenburg” Concertos, most of the suites for solo instruments, and many lost concertos.

Evidence of the early concertos can be found in Bach’s transcriptions made in Leipzig, where he converted older works into keyboard concertos for the Collegium Musicum, an ensemble of professional and amateur musicians. Even without the original sources, the musical contents of the keyboard concertos reveal traces of other solo instruments, such as the idiomatic repeated-note figures that emerge from crossing string-to-string on a violin. Twentieth-century scholars took the logical step of recreating several lost concertos by working backward from the keyboard concertos. Thus, the Concerto for Two Keyboards in C Minor, BWV 1060, was reborn as the Concerto for Oboe and Violin.

In the Allegro opening movement, the solo parts offer clues as to the instruments that Bach had in mind. The second part is undoubtedly a violin line, with figures divided between two adjacent strings, one moving melodically, the other holding constant. In the first solo part, the sustained tones exploit the oboe’s ability to shape long, slow-moving phrases with the breath.

The gorgeous middle movement weaves the two solo voices in fluid counterpoint, supported by a gentle, rocking pulse of accompaniment. In the fast finale, the more virtuosic material goes to the violin soloist, who barrels through quick sextuplets under leaping figures from the oboe.

Minnesota-based choir Border CrosSing explores Baroque music by Johann Sebastian Bach and Latin American composers Manuel de Zumaya, Esteban Salas y Castro and Manuel Mesa y Carrizo. Bach’s Sanctus from Mass in B Minor, selections from Cantata No. 147 including “Jesu, Joy of Man’s Desiring” and a double concerto for violin and oboe are paired with celebratory works for chorus and orchestra by Baroque composers from Mexico, Cuba and Bolivia.