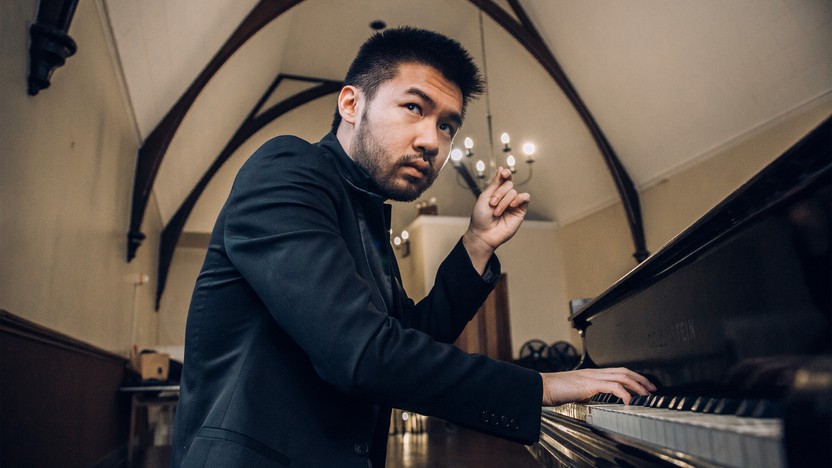 In 1926, American composer Ruth Crawford Seeger won a scholarship in composition from the Institute of Musical art, which had just been taken over by the Juilliard Musical Foundation. With her application for the scholarship, she submitted two samples of her work: the Sonata for Violin and Piano and Music for Small Orchestra. According to Crawford’s records, Music for Small Orchestra was not performed during her lifetime; the premiere was in 1969 at West Texas State University.

Music for Small Orchestra is the first of three orchestral works in Crawford’s compositional output. The piece is uniquely scored for flute, clarinet, bassoon, four individual violin parts, two individual cello parts, and piano. Crawford experiments with simultaneously using high and low instruments in the extremes of their registers throughout the two-movement suite. For example, the bassoon will play high pitches sounding above low sonorities on the flute, and the cellos sometimes play higher than the violins. Additionally, there is very little instrumental doubling in the piece. As such, when the four violins and cellos have a solo melody in unison, it creates a powerful musical moment.

One of the most significant compositional features of Music for Small Orchestra is Crawford’s use of ostinatos, which are repeated musical patterns. In the first movement, multiple ostinatos are layered on top of each other, creating a dense texture. Often, this layering results in extraordinary polyrhythmic complexity between each part and a thick veil of sound. These ostinatos are usually harmonically unrelated as well, further contributing to the intensity.

The second movement also uses ostinatos, although there is a more pronounced distinction between the free, rhapsodic melody of the theme and the repetitive underlying ostinatos. Marked as “In roguish humor. Not fast,” this movement exhibits many of the joke-like qualities of a scherzo. There is perpetual motion, and duple rhythms in the accompanying ostinatos are layered with triple rhythmic figures in the soaring theme.

Music for Small Orchestra is one of Crawford’s earliest works, and it demonstrates many of the artistic priorities and compositional techniques that would become integral to her later pieces. These include the use of quartal and quintal harmonies infused with the dissonant tritone, counterpoint centered around intervallic patterns, and the use of rhythm as a structural parameter.

Carlo Gesualdo is equally famous for the extraordinary chromaticism in his musical compositions and for the scandals surrounding his personal life. The Prince of Venosa and Count of Conza, Gesualdo married Maria d’Avalos in 1586. Just four years later, he murdered Maria and her aristocratic lover upon finding them “in flagrante delicto di fragrante peccato.”

Gesualdo dealt with increasingly severe mental illness and interpersonal conflicts for the remainder of his life. It is reported that he had a volatile relationship with his second wife Leonora d’Este, he took a mistress who was convicted of witchcraft, and he kept a servant for the sole purpose of ritually beating him each day.

Gesualdo’s most well-known works are his six books of five-voice madrigals, which he published between 1594 and 1611. His earliest madrigals were composed in Ferrara and may have been intended for performance by women in the renowned Concerto delle donne, one of the earliest ensembles of professional women musicians in Western Europe.

Madrigals of the time were intended to showcase cleverness and complexity, and every textual image is matched with its own musical idea. Composers of the time utilized a myriad of compositional devices such as dissonance, register changes, disjunct melodies, long melismas, and sighing motives to aurally depict words such as love, agony, death, and ecstasy.

It was Gesualdo’s fifth and sixth books of madrigals, in particular, that established his legacy as a composer. Gesualdo modeled his madrigals on the aforementioned principles, yet he pushed the boundaries of chromaticism and dissonance in Books 5 and 6 to extremes that would not be seen again in Western classical music for another 300 years.

“Resta di darmi noia” was published in Gesualdo’s sixth book in 1611, and the text portrays the bitter anguish of unrequited love. The narrator lashes out at the cruel and deceitful feelings of infatuated passion and concludes that all joy is dead.

The sensational details of Gesualdo’s personal life and the uniquely forward-thinking compositional devices he employed inspired a number of twentieth-century novels, short stories, and operas.

Carl Philipp Emanuel Bach composed a prolific number of concertos across his career, although he regarded his 1772 collection of Six Concertos for Keyboard as some of his best. Just four years before their publication, Bach had been released from his nearly thirty-year court appointment to Frederick the Great in Berlin to become the music director for the city of Hamburg. This position included many new professional responsibilities, such as composing a setting of the Passion each year, writing music for civic occasions, and overseeing the music performed at the five city churches each week.

At the same time, there was an increasingly large market of amateur musicians interested in purchasing keyboard music. Now that Bach had the opportunity to compose for a broader public audience rather than for a small group of court aristocrats, he began to publish collections with a more popular appeal. The Six Concertos for Keyboard, which includes the concerto on today’s program, are one such collection. Bach published the concertos at his own expense and sold copies of them through subscription. Although Bach marketed the pieces as “easy,” they are by no means simplistic.

The sense of “easiness” in the Concerto in D comes from its straightforward phrasing, tuneful melodies, and appealing dance-like rhythms. Yet there is also a sense of formal adventurousness in the piece. For example, the soloist unexpectedly interrupts the orchestra with slow musical material two times in the first movement. Moreover, the first movement proceeds directly into the second movement without pause, and Bach uses unconventional key relationships between these movements. The first movement is in D major, while the second is in the unusual key of E minor. This unique combination of approachable phrases and melodies with intellectual compositional experimentation resulted in a concerto that both amateurs and connoisseurs found appealing.

American composer Morton Feldman was a pioneer in the development of indeterminate and avant-garde music. Many of his works are depicted in graphic scores with grids, rather than with conventional music notation. Feldman also experimented with chance in his music by indicating the number of notes to be played in a certain number of seconds, while not specifying the notes’ individual durations and/or pitches.

In addition to his more experimental works, Feldman also composed using traditional Western music notation of pitch and duration. This is the case for The Viola in My Life 3, which was published in 1972. Like many of his works, the performance indication in the score is “extremely quiet.” The piece is scored for viola and piano, and it imperceptibly alternates between 2/2 and 3/2 meters.

Feldman admired the “flat surface” found in the paintings of American artists such as Mark Rothko and Philip Guston, and he desired to create the sonic equivalent to that visual concept. As such, his music is not saturated with any type of complex polyphony between the parts and is quite straightforward in procedure. Feldman’s pieces are crafted in such a way as to give the illusion that the listeners themselves are shaping the trajectory of the music as they experience it in real time.

As Nils Viegland writes of Feldman’s music, “Though it is true that his values of graduation can be exceedingly fine, when one enters this scale and comprehends it, something truly new and wonderful opens up in the art of music—a world in which the relative and the absolute become engaged with themselves.”

Wolfgang Amadeus Mozart composed Concerto No. 24 during his fourth season in Vienna at a time when he was gaining rapid renown as a pianist and composer of concertos. Concerto No. 24 was premiered in April 1786 at the Viennese Burgtheater, with Mozart himself playing the solo part and conducting the orchestra from the keyboard. Ludwig van Beethoven was tremendously impressed by the work, and Johannes Brahms later wrote that this concerto was a “masterpiece of art and full of inspired ideas.”

The extensive first movement of Concerto No. 24 repeatedly defies the listener’s expectations by challenging conventions of structure and harmony. Most concertos from this time period open with a straightforward melodic theme that clearly defines the key of the piece within the first few measures. The first theme of Concerto No. 24, however, boldly contains all twelve chromatic pitches, and the home key of C minor remains ambiguous until measure thirteen. Likewise, in many of Mozart’s other concertos, the first solo entrance begins with the same music played by the orchestra at the opening of the movement. In Concerto No. 24, the pianist instead enters with a lengthy passage of new musical material.

The development section of the first movement features a particularly turbulent, passionate, and operatic dialogue between the pianist and the orchestra before leading into a more conventional recapitulation of the opening themes. Boundaries are broken once more in the coda at the very end of the movement, as the pianist unexpectedly interrupts the orchestra for a final virtuosic solo moment.

One of the defining sonic features of Concerto No. 24 is Mozart’s imaginative and unusual use of both oboes and clarinets. Throughout the piece, the winds have important moments where they take precedence over the strings. This is especially noteworthy in the tender Larghetto. With its elegant phrases, simplistic themes, and predictable ABACA rondo structure, this movement provides an exceptional contrast to the tumultuous first movement.

Concerto No. 24 concludes with a theme and variations, which begins with a straightforward orchestral statement of the theme. Each of the eight variations inventively incorporates rhythmic, harmonic, textural, and/or melodic contrast, with the final variation and coda bringing the whole concerto to a triumphant close.

Operatic drama permeates Piano Concerto No. 24, which was written shortly before Mozart’s Le nozze di Figaro premiered. In fact, Mozart would shortly thereafter become known more as an opera composer than as an instrumental composer and performer.

Pianist and composer Conrad Tao makes his SPCO debut in a program built around Wolfgang Amadeus Mozart’s monumental Piano Concerto No. 24. A Renaissance madrigal by Carlo Gesualdo, a sunny keyboard concerto by C.P.E. Bach, and a cryptic work for viola and piano by Morton Feldman are like a twisting labyrinth of darkness and light that anticipates the harmonic instability and searching quality of Mozart’s concerto. Ruth Crawford-Seeger’s Music for Small Orchestra frames this journey with a slow, pensive descent into the dark maze and a roguish finale that climbs towards a window of light.

Our new Express Concerts are 60-75 minutes of music without intermission. This performance also features movements from the listed works interspersed with one another, flowing from one movement to the next without pause. Learn More