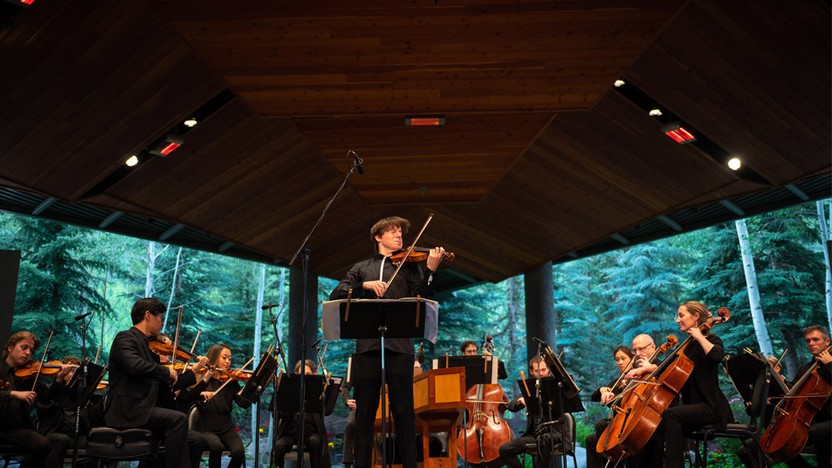 Wolfgang Amadeus Mozart’s long and lucrative run touring Europe as a child prodigy came to a close in 1771, when the 15-year-old was getting a bit too old to pull off the boy wonder routine that his father had helped him perfect. Stuck back in the sleepy church town of Salzburg, where he worked alongside his father in the court of an officious archbishop, Mozart did all he could to find his own musical outlets, including many gigs entertaining Salzburg’s upper crust with symphonies, concertos, serenades and other pleasant diversions. He actually wrote about half of his lifetime output of symphonies during those journeyman years, including one of his first works of utter genius: the Symphony No. 25 in G Minor, written at 17.

During Mozart’s adolescence, the symphony itself was still in a state of infancy. Growing out of the Italian overture or sinfonia, traditionally in three sections patterned fast-slow-fast, the symphony assumed its familiar dimensions with the insertion of a third-movement minuet, a style borrowed from French dance suites. The composer most closely associated with the development of the symphony was Franz Joseph Haydn, and by the early 1770s he was past his fiftieth symphony. Mozart didn’t have the benefit of direct contact with Haydn until later in Vienna, but he did enjoy close proximity to Joseph’s younger brother Michael Haydn, the Salzburg Konzertmeister and a fine composer of symphonies himself.

Between 1768 and 1774, Joseph Haydn wrote a number of symphonies that reflected the highly emotive Sturm und Drang (“Storm and Stress”) aesthetic that was also sweeping through literature, theater and art at the time. Mozart entered similar emotional territory in Symphony No. 25, the first of only two minor-key symphonies in his output. (This one is sometimes called the “Little G-minor” to differentiate it from Symphony No. 40 in the same key.)

The first twelve measures of the opening Allegro con brio are as terrifying as anything in Mozart’s output. There are moments of relief in the symphony — the contrasting major-key theme in the first movement, the docile Andante movement, and the wind ensemble music in the minuet’s trio section, for example — but overall, the work is uncompromising, holding its tense edge through to the end of the Allegro finale.

Max Bruch’s mother was a singer, and his also first music teacher. By the age of 20, Bruch was captivating German audiences as a budding opera composer, and for the next sixty years, he built his sterling reputation on his many works for choir and individual voices. But modern audiences tend not to know of Bruch’s vocal roots, given the outsize influence of a handful of scores he wrote for soloist and orchestra: Kol Nidrei for cello, the Scottish Fantasy for violin and, above all, the First Violin Concerto.

Bruch’s signature composition transfers his vocal sensitivity to the violin, an instrument that, as he once wrote, “can sing a melody better than a piano — and melody is the soul of music.” He began working on the concerto in 1864, and he conducted the premiere of an initial version in 1866, but he was not satisfied until he incorporated suggestions from the Hungarian virtuoso Joseph Joachim, the same violinist who later provided similar guidance for Johannes Brahms’ Violin Concerto. Joachim debuted the authoritative version in 1868, and Bruch’s concerto spread quickly into the hands of leading violin soloists.

Unlike a typical concerto, with its meatiest music concentrated in the first movement, Bruch’s structure begins with a free-ranging Vorspiel (Prelude) full of improvisatory solo declamations. The central Adagio exemplifies the singing quality of Bruch’s style, with the violin’s initial phrases occupying the instrument’s warm contralto range. Influenced by Joachim’s input, the main theme of the energetic finale evokes Hungarian folk-fiddling with thick chords and double-stops.

Georges Bizet was a star student at the Paris Conservatory, writing this self-assured Symphony in C Major at 17 and winning the prestigious Rome Prize at 19. He spent his short adult life mostly occupied with operas, planning as many as 30 but leaving only six intact. Bizet endured a string of setbacks, false starts and poor reviews; even Carmen was panned in Paris and caught on only after a successful Viennese production. He died at the age of 36, never witnessing the triumph of his signature opera.

Like any good student, Bizet took inspiration from his forebears, incorporating aspects of Wolfgang Amadeus Mozart, Ludwig van Beethoven, Franz Schubert, Felix Mendelssohn and, above all, his teacher Charles Gounod, to whom he later wrote, “You were the beginning of my life as an artist. I spring from you.” Bizet made no effort to arrange for the symphony’s performance or publication in his lifetime, and the neglected manuscript passed from his widow to another composer and finally back to the Conservatory. It was only rediscovered and performed in 1935, but within a year it spread to over a dozen cities on three continents, and by century’s end it had been recorded nearly 50 times, allowing this symphony to earn its rightful reputation as one of the strongest compositions ever created at so young an age.

The opening movement’s Classical balance and breathless exhilaration recall Mozart, another symphonic prodigy who was always an opera composer at heart. The plaintive, song-like slow movement reaches into an even more distant past when it incorporates stately dotted rhythms and fugal counterpoint in a Baroque style, while the scurrying finale updates the whimsical frenzy of Mendelssohn.

After their thrilling collaboration at the 2021 Bravo! Vail Music Festival, violinist Joshua Bell and The Saint Paul Chamber Orchestra teamed up again for a program of Romantic favorites and Wolfgang Amadeus Mozart’s “little” G minor symphony. Bell, a former SPCO Artistic Partner, brought his lyrical abilities and virtuosic prowess to Max Bruch’s Violin Concerto No. 1 and directed the orchestra from the concertmaster chair for two contrasting symphonies that highlight the exciting chemistry between Bell and the SPCO players.