Home Concert Calendar For Justice and Peace with Xavier Foley

For Justice and Peace with Xavier Foley 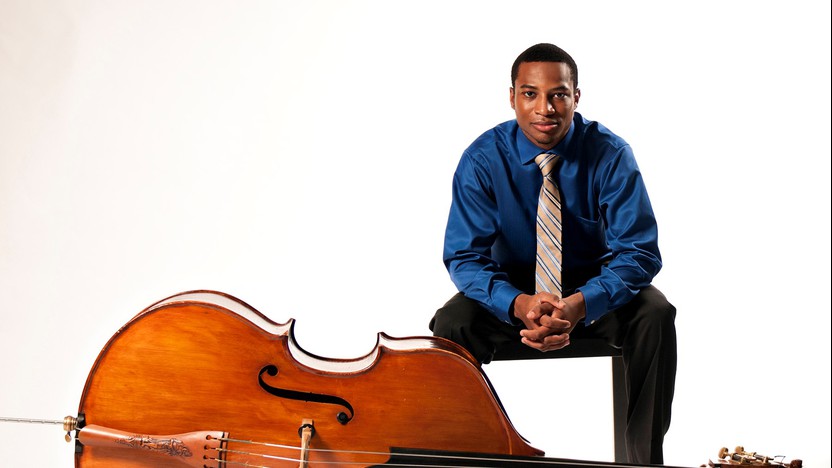 Giovanni Bottesini, the legendary virtuoso of the double bass, only picked up the instrument by a fluke. At the age of thirteen, having excelled in his studies as a violinist (along with singing in choirs and playing timpani), he prepared to audition for the Milan Conservatory, only to learn that the available scholarships were limited to bassoon or bass students. He learned enough bass in a matter of weeks to win the scholarship, and he graduated four years later with a prize that financed the purchase of his first high-quality instrument.

Bottesini built a career as a world-traveling bass soloist, and he also found success as a conductor and composer. His numerous operas have faded from the repertoire, but his scores for double bass remain cornerstones of the instrumental canon. He composed the Grand Duo Concertante in 1880 as a double concerto for two basses; the same year, the violinist Ernesto Camillo Sivori transcribed the work for violin and bass soloists, the version most often heard today.

Following a majestic introduction from the orchestra, the soloists arrive with a series of dashing cadenzas and a sweet melody that passes from the violin to the bass. There is an operatic quality throughout the single continuous movement, combining the virtuosity of an instrumental concerto with the drama of a vocal duet.

Xavier Foley was already winning major competitions as a bassist by the time he completed his undergraduate studies at the Curtis Institute of Music in 2016. On top of a busy schedule of concert appearances as a soloist and chamber musician, Foley has composed a large catalog of solo music for bass, and he also authored a children’s book and sells his own carbon fiber bass bows on his website. He wrote the following description of For Justice and Peace, which was premiered during a 2019 tour by the Sphinx Virtuosi, with the composer featured as one of the soloists in this heart-wrenching work full of emotional and technical demands.

“This double concerto, co-commissioned by Carnegie Hall, the Sphinx Organization, and the New World Symphony, was created to mark the 400 years of slavery ever since the arrival of the slave ship “White Lion” in Jamestown, Virginia. The work features a chorus at the end, where they sing text inspired by frequent court cases where slaves have asked for their freedom, which was often denied because of the color of their skin.

“This work also features a gavel, which represents the justice system that slowly took away colored people’s rights as the years passed. The double bass and violin represent two principal voices that paint the full picture of what life was like during slavery in what was soon to become the United States of America.”

Even the name of that violin sonata comes with an epic backstory. Beethoven eventually dedicated the score to Rodolphe Kreutzer, a French violinist and composer who had visited Vienna in 1798, and “Kreutzer” stuck as a nickname even though Kreutzer himself never played it. The actual violinist for whom Beethoven wrote the sonata, and the one who joined him for the premiere in 1803, was George Bridgetower, born in Poland to a Caribbean father of African descent and a European mother. Before they had a falling out, Beethoven had referred to his score as the Sonata mulattica, in reference to Bridgetower’s mixed racial heritage.

“The Kreutzer Sonata” — the work itself and the name — took on new significance when Leo Tolstoy gave that title to an 1889 novella. It tells the story of a disaffected wife who, swept up by the passion of Beethoven’s sonata, has an affair with the male violinist with whom she plays piano, only to be caught and murdered by her husband. International censorship and outrage put The Kreutzer Sonata into the center of public debate, and a host of artists followed with plays, paintings and other creations inspired by Tolstoy’s scenario.

This larger-than-life sonata has always drawn musicians to approach it with expanded forces, starting with a string quintet arrangement released by Beethoven’s publisher in 1832. The arrangement for strings featured in this performance, created by the Australian violinist Richard Tognetti, surrounds the focus and virtuosity of a solo violin with a rich, orchestral body of sound.

The “Kreutzer” Sonata embraces extremes from the outset, staying in its home key for only four measures of unaccompanied violin before the slow introduction veers to a minor key. Normally the tonal tension would resolve with the arrival of the fast body of the movement — in this case, an extremely fast presto tempo — but instead the instability continues, with the two sections unified by the obsessive gesture of a rising half-step from E to F. Even the presto flow is kept unpredictable, peppered with brief passages that pull back to a slow tempo, recalling the introduction. The consoling second theme does eventually reach the key of A-major, but ultimately a coda delivers this fiery first movement back to the crucible of A-minor.

In one of Beethoven’s brilliant touches on interconnection, the theme of the slow movement enters with the note F falling a half-step to E, the reverse of the previous movement’s anxious motto. Instead of just decorating the tune, the ensuing variations explore imaginative textures, the sheet music blackened by an uncommon density of notes. For the finale, Beethoven used another Presto movement that he had written and discarded a year earlier while working on a different sonata. The bouncing theme recalls the hunt-inspired momentum of Haydn’s finales, but like everything else in this new phase for Beethoven, the intensity is amplified.

Composer and bassist Xavier Foley makes his SPCO debut with two works that showcase his dynamism and virtuosity on the double bass as well as his musical friendship with SPCO violinist Eunice Kim, with whom he has toured throughout the country. Foley’s composition, a double concerto for violin and bass, was written in 2019 to mark the 400 years since the arrival of the White Lion, the first ship that brought enslaved Africans to Jamestown, VA, and makes a powerful statement about social justice amid a gavel sound as the chorus ask, “your Honor, where is my freedom?” Concluding the program, Principal Violin Kyu-Young Kim solos with the SPCO strings in a grand work from Ludwig van Beethoven’s middle period.

All audience members are required to present proof of full COVID-19 vaccination or a negative COVID-19 test within 72 hours prior to attending this event. Masks are required regardless of vaccination status, and high quality masks, such as N95 respirators, are recommended over cloth or surgical masks. More Information