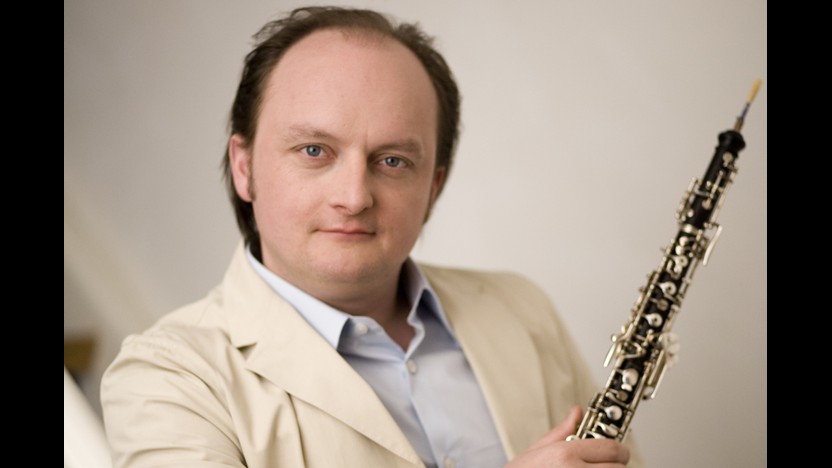 The twenty-year-old Schubert had already composed five Haydnesque symphonies and a number of other orchestral experiments when he tried his hand at two overtures “in the Italian style.” Inspiration for the scores came from opera overtures, particularly those of Rossini, who was only five years older but already making waves throughout Europe with his bright and colorful curtain raisers. It was one of Schubert’s new overtures — probably this one in C major — that provided his long-overdue debut at a public concert, in March of 1818. He also made a festive transcription of the overture for four pianists (eight hands) at two pianos to play at a private event, indicative of the kind of rich social atmosphere that sustained Schubert’s musical life through his endless disappointments in the public sphere.

When a musicologist, in the 1950s, sought to compile the first exhaustive catalog of works by Joseph Haydn, he included this Oboe Concerto, based on the existence of parts on which someone wrote the name Haydn (obscuring the original name underneath). Musicologists now agree, for the most part, that Haydn did not compose this particular work, but how it came to bear his name remains a mystery. Surely profit motive figured in, since it was written at a time — perhaps between 1790 and 1800, judging from the style and scoring — when Haydn’s works commanded top dollar on the international market. As for the true author, one plausible option would be the oboist and composer Ignaz Malzat, who studied with Haydn’s brother Michael. Whoever wrote the Oboe Concerto in C had admirable command of the musical style practiced in Vienna in the 1790s, and they clearly knew how to maximize the singing quality of the oboe.

When Felix Mendelssohn was 19, he wrote a short piano piece as a birthday gift for his sister Fanny, marking his first entry in a new genre he called Lieder ohne Worte, or “Songs Without Words.” It may have started as something of an inside joke between talented siblings, but Mendelssohn returned to this format time and again throughout his life, eventually publishing six volumes of Songs Without Words, each comprising six selections, followed by two more volumes that reached the public posthumously. Most of the entries are simply labeled with a tempo marking in Italian, and yet the melodies are so organic and tuneful that the imagination can hardly help but make guesses as to the “missing” words. (The composer’s good friend Robert Schumann was convinced that Mendelssohn must have written actual songs and then omitted the lyrics from the printed scores.) Only a few of the movements came with any sort of descriptive heading, like the one that Mendelssohn identified as a “Venetian Gondola Song,” played third in this sequence. The voice-like nature of these wordless melodies comes to the fore in arrangements from 2009 by the German composer and oboist Andreas Tarkmann.

At twenty, Mendelssohn did what most young men from wealthy families did at the time: He embarked on a “grand tour” through Europe. Whereas Scotland inspired the stormy Hebrides Overture and the Scottish Symphony, a visit to sunny Italy sparked a symphony that, according to the composer, was “the jolliest piece I have ever done.” He sketched part of the symphony while in Italy in 1830–31, and he completed it in 1833 for the Philharmonic Society of London, the same group that had commissioned Beethoven’s Ninth Symphony. Mendelssohn’s bright impressions of Italy are borne out by the bouncing themes and running triplet pulse of the Allegro vivace movement that opens the symphony. The Andante con moto may have been influenced by a religious processional Mendelssohn witnessed in Naples, an image that fits with the movement’s walking bass and grave harmonies.

The moderate pace and smooth flow of the third movement resemble the minuets native to the symphonies of Mozart and Haydn, as opposed to the more rambunctious scherzos popularized by Beethoven. For the symphony’s whirlwind finale, Mendelssohn borrowed the lively rhythmic patterns of the saltarello, a folk dance from central Italy defined by its fast triplet pulse and its leaping movements.

Viva l’Italia! Mendelssohn embraced this land of bright sunshine and hot-blooded romance, qualities he infused into his ebullient Italian Symphony. And he learned well the lessons of heartfelt singing from that birthplace of opera, which he translated into the achingly pure melodies of his Songs Without Words. Schubert’s stirring Overture also honors Italian opera, while a standout concerto from Haydn’s time points to Italy’s role in creating a new kind of star: the virtuoso soloist.

Can't attend any of these performances? Join us on the West Side of Saint Paul on Thursday, November 21 at 7:00pm