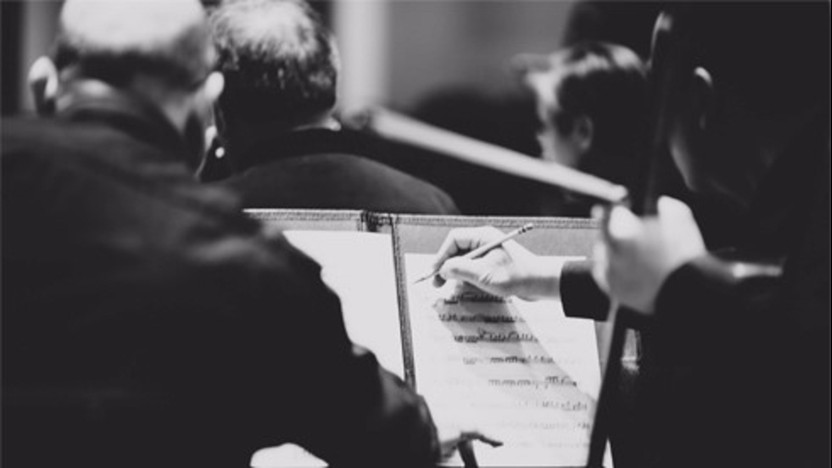 Born in Romania to Hungarian parents, Gyorgy Kurtag moved in 1946 to Budapest, where he followed a musical path blazed earlier in the century by Bela Bartok. It was not until 1957, during a year of study in Paris, that Kurtag encountered the modern styles that had failed to penetrate the “Iron Curtain.” He took lessons from Messiaen and Milhaud, and he also transcribed many of Webern’s scores, gleaning that composer’s gifts of concision while mostly rejecting the underlying twelve-tone orthodoxy. Composed in 1988–89 in memory of the Hungarian composer Andreae Szervanszky, Kurtag’s Officium breve (Latin for “short service”) for string quartet compresses sixteen discreet sections into twelve minutes of haunting and unresolved contemplation.

When Mozart, the former child prodigy, found himself still stuck at home in Salzburg in his early twenties, he took the leap of moving to Vienna in 1781 to start a freelance career. One of his best income streams during those first years in Vienna was his series of self-produced concerts, like the one at the Burg theater in 1785. That program featured the debut of the piano concerto he had completed just the night before, one of 15 (out of a lifetime total of 27) composed between 1782 and 1786, his peak performing years. The opening tutti of Piano Concerto No. 21 in C establishes the concerto’s majestic and expansive tone with a marching motive in a broad tempo. The first movement has its darker moments as well, like when the piano veers into the key of G minor. The Andante — familiar to movie buffs from its prominent use in the 1967 Swedish film Elvira Madigan — plays like an operatic aria for the piano. After music of such breadth and high emotion, the finale provides a charming and uncomplicated affirmation in C major, with ample passagework that must have delighted those patrons who had paid to see Vienna’s primo virtuoso.

After studying at Budapest’s Academy of Music from 1945 to 1949, Ligeti began his career writing in a folk- influenced style indebted to his Hungarian predecessors Bartok and Kodaly. Ligeti fled Hungary in the midst of the Soviet invasion in 1956, and he went on to hone his signature style of micropolyphony in the 1960s, a sound that reached a worldwide audience when several examples appeared in Stanley Kubrick’s 2001: A Space Odyssey. Even during the early Hungarian phase of his career, Ligeti was experimenting with novel ways of organizing notes and ideas. In eleven short movements for piano composed between 1951 and 1953, grouped under the title Musica ricercata, the premise was that each portion would use a fixed number of pitches: two in the first movement, three in the second, and so on, until the final movement used all twelve chromatic pitches. The full piano suite did not receive a complete performance until 1969, but Ligeti arranged Nos. 3, 5, 7, 8, 9 and 10 into the Six Bagatelles in 1953, and in that form it has become a darling of wind quintets around the globe. A casual listener is unlikely to suspect the rigorous rationale behind these brief and whimsical movements that live up to label of bagatelle, named after the French word for “trifle.”

Mozart completed the Piano Concerto No. 22 in E-flat on December 16, 1785, amid his work on the opera The Marriage of Figaro. This was the first piano concerto in which Mozart included clarinets, and in doing so he placed a spotlight on the woodwinds in general, as heard in the prominent solos and countermelodies throughout the opening tutti section. In the variations that make up the Andante, one episode for winds alone and another featuring a cheerful duet for flute and bassoon maintain the focus on individual woodwinds and their songlike expressivity. Nested between the hunt-inspired outer sections of the finale, a passage marked Andantino cantabile intervenes with what is essentially a whole new slow movement, one graced with woodwind passages that might be the most beautiful yet.

Join us at an open rehearsal to hear how the program comes together.

Description of the concert being rehearsed:

Norwegian pianist Leif Ove Andsnes makes his highly anticipated return to the SPCO to lead a pair of Mozart Concertos from the keyboard. Andsnes, one of his generation’s finest pianists, is currently embarking on a multi-year project to study and perform Mozart’s piano works from the highly productive and creative period in 1784 and 1785. Piano Concertos Nos. 21 and 22 were written at the peak of Mozart’s output in 1785 and display his mastery of the genre.

Please note: Specific works and artists involved in the rehearsal are to be determined.