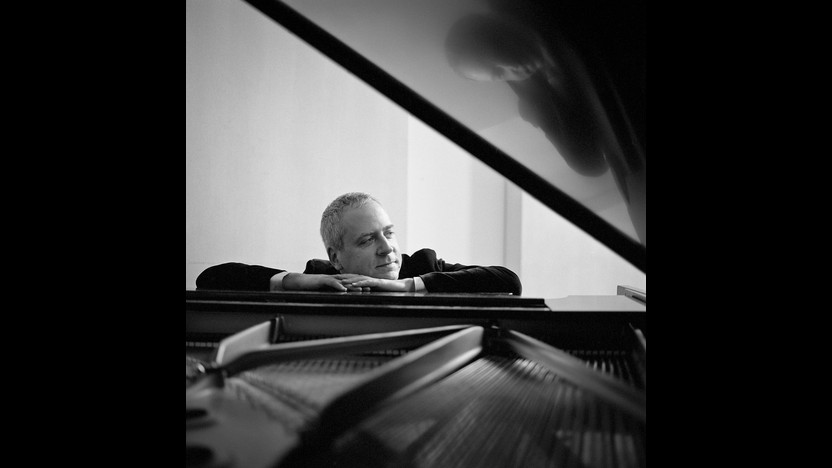 Following the outbreak of the First World War, Darius Milhaud, having been rejected from military service for medical reasons, took a job with the foreign ministry. The poet Paul Claudel had recently been appointed minister to Brazil; in 1916, Claudel offered Milhaud a position as part of his diplomatic corps, and they traveled to Rio de Janeiro in January of the following year.

Milhaud found Brazil sonically intoxicating. His discovery of that country’s popular music and the sounds of the rainforest enchanted him, permeating his compositional vocabulary throughout the remainder of his career—most riotously in Le Bœuf sur le toit, a ballet with a scenario by Jean Cocteau.

Milhaud wrote about Le Bœuf: “Haunted by my memories of Brazil, I assembled some popular melodies—tangos, maxixes, sambas, and even a Portuguese fado—and transcribed them with a rondo-like section recurring between each successive pair… suitable music for a Charlie Chaplin film. … Cocteau said my idea was a waste, suggesting instead using it for some sort of stage show… Typically, hardly had he conceived an idea than he carried it out… Cocteau created a pantomime scenario for my music, set in an American bar during Prohibition. The characters were a Boxer, a Negro Dwarf, a Lady of Fashion, a Red-headed Woman Dressed as a Man, a Bookmaker, a Gentleman in Evening Clothes, and a Barman who serves drinks to everyone present.”

Le Bœuf sur le toit (“The Bull on the Roof”) is the name of the ballet’s imaginary bar. (An actual “Le Bœuf sur le toit” opened in Paris two years after the ballet’s premiere.) The sassy “Thème du Barman” opens the ballet: a boisterous tune in the trumpets, capped by a flirtatious wink of the flute and clarinet. Between recurrences of this theme, the other characters appear. Per Cocteau’s scenario: a policeman arrives and the patrons turn the rowdy watering hole into a wholesome milk bar. The bartender turns on a large overhead fan, decapitating the policeman; the cross-dresser dances with the severed head (a satiric nod to “The Dance of the Seven Veils” in Strauss’s Salome). As the motley clientele departs, the bartender reconstitutes the policeman and presents him with the evening’s bill.

Milhaud was confounded by Cocteau’s scenario. “I, who hated comedy,” he later wrote, “had only aspired to create a merry divertissement in memory of the Brazilian rhythms that had so captured my imagination.”

Leonard Bernstein observed over a decade after Charles Ives’s death that the American iconoclast, who had never achieved mainstream popularity during his lifetime, was “on the verge of being canonized.”

“America has always needed her saints,” Bernstein continued, “partly because she is so young comparatively, and partly out of a certain profound cultural guilt. Now Ives fits perfectly into his saintly niche. We have suddenly discovered our musical Mark Twain, Emerson, and Lincoln all rolled into one.” The spirit of adventure that characterized Ives’s music, manifested in his audacious approach to rhythm, harmony, and form, had become recognized as quintessentially American. “But,” Bernstein noted, “the real measure of Ives’s greatness is that those works of his that do not rely on such experimentation … for all their simplicity and easy listenability succeed in carrying a strongly personal and original message.”

Such is the character of Ives’s nostalgic Symphony No. 3, which forgoes the cacophonous manner of his more notorious works. Subtitled The Camp Meeting, Ives’s Third Symphony makes prominent use of hymn tunes, evoking the evangelical revival services from his childhood in Danbury, Connecticut—integrating them into a modernist framework. The symphony’s three movements were originally conceived as works for solo organ, which Ives played in his capacity as organist at New York City’s Central Presbyterian Church between 1899 and 1902; Ives orchestrated these in 1904, and revised them between 1908 and 1911.

The first movement, “Old Folks Gatherin,” quotes the hymn tunes Azmon (“O for a Thousand Tongues to Sing”), Erie (“What a Friend We Have in Jesus”), and Woodworth (“Just As I Am”). Despite its uncompromising dissonance, the movement’s lush string textures and moments of tender lyricism allow an unassuming simplicity to prevail. “Children’s Day” departs from the first movement’s nostalgic warmth in favor of a beguiling brio. The hymn tunes Azmon and Woodworth return in the prayerful finale, “Communion,” whose original organ version was indeed intended for the communion rite. After failing to attract interest for over three decades, Ives’s Symphony No. 3 was finally premiered in 1946; the following year, it received the Pulitzer Prize for Music. Legend has it (perhaps spuriously, as the story comes from Ives himself) that Gustav Mahler chanced upon the score years earlier in a music shop in New York City, immediately recognized its merit, and made plans to conduct its premiere in Europe—but died before he had the opportunity.

In 1938, Bartók received a joint request from the Hungarian violinist Joseph Szigeti and the American clarinetist Benny Goodman for a classical chamber work that they could play together. The result, completed within one month of the request, was a two-movement work entitled Rhapsody, for clarinet and violin with piano accompaniment. Goodman, Szigeti, and the pianist Endre Preti premiered the work in New York. The following spring, Bartók traveled to New York to record the work himself with Goodman and Szigeti. During this trip, he composed an additional movement and changed the work’s title to Contrasts.

The contrasts highlighted by the work are manifold. In addition to the dichotomy of idioms that distinguishes the classical virtuoso Szigeti and the jazz musician Goodman, Bartók’s music moreover casts the characteristic timbres of their instruments in sharp relief.

The opening movement is a “Verbunkos,” a traditional Hungarian dance with a peculiar function: it is performed by military officers in full uniform as a form of army recruitment. The movement is fittingly proud and dignified in character, and features an acrobatic clarinet cadenza.

The delicate and mysterious textures of the second movement, “Pihenö” (“Relaxation”) illustrate Bartók’s “night music” idiom, described by Bartók scholar David Schneider as characterized by “eerie dissonances providing a backdrop to sounds of nature and lonely melodies.” The movement’s slow contrapuntal introduction between the clarinet and violin recalls the tonality of an Indonesian gamelan orchestra.

The work’s finale is entitled “Sebes,” a lively Hungarian dance. The literal contrasts employed here include those between a scordatura violin at the movement’s opening and a properly tuned instrument moments later; and between the standard B-flat clarinet and the sweeter tone of the clarinet in A, for the lyrical middle section, which features a thirteen-beat meter taken from Bulgarian folk music. As if responding to the clarinet’s show of virtuosity in the first movement, the violinist plays a fiery cadenza before the movement’s end.

George Gershwin composed his most celebrated work, the piano concerto Rhapsody in Blue, in 1924. The concerto wedded popular and classical music and made Gershwin famous for bringing jazz into the concert hall. Listeners at the time saw Rhapsody in Blue as Gershwin exploring uncharted territory, but, as historian Richard Crawford writes, “in fact it reaffirmed Gershwin’s continuing involvement with classical music…The musical juxtapositions of Rhapsody in Blue had roots in a sensibility that never fully accepted a separation between popular and classical genres.” By the time he turned thirty in 1928, Gershwin was America’s most famous composer of both popular and concert music. More than seventy years after his death, he remains a vital part of America’s musical profile. Gershwin composed some of the most iconic tunes ever written: in addition to the unforgettable melodies in Rhapsody in Blue, standards like “Summertime” and “Someone to Watch over Me,” which, beyond the scope of the musical world, have become hallmarks of American culture.

Gershwin described to his biographer Isaac Goldberg how his Rhapsody came to him, epiphanically, while on a train to Boston…

"… with its steely rhythms, its rattle-ty bang, that is so often so stimulating to a composer – I frequently hear music in the very heart of the noise.... And there I suddenly heard, and even saw on paper – the complete construction of the Rhapsody, from beginning to end. No new themes came to me, but I worked on the thematic material already in my mind and tried to conceive the composition as a whole. I heard it as a sort of musical kaleidoscope of America, of our vast melting pot, of our unduplicated national pep, of our metropolitan madness. By the time I reached Boston I had a definite plot of the piece, as distinguished from its actual substance."

Gershwin toured Europe in 1928 and met many of the day’s leading composers: Ravel, Milhaud, Poulenc, and Prokofiev in Paris, William Walton in England, and Alban Berg in Vienna. While in Paris, Gershwin applied to study with both Nadia Boulanger—the teacher of Aaron Copland and many other American composers—and Ravel. Both refused, explaining that their instruction could only adulterate Gershwin’s unique voice. Gershwin, by this time, had also become very wealthy—licensing fees from Rhapsody in Blue alone earned him a quarter of a million dollars within ten years of its publication. When Ravel discovered the breadth of Gershwin’s success, he replied, “You should give me lessons.”

Kicking off the SPCO’s first full season in the new Ordway Concert Hall, the 2015.16 season opens with a program of works inspired by popular music from the early 20th century. Darius Milhaud was influenced by Brazilian dance music when composing Le boeuf sur le toit, while Charles Ives’ Third Symphony celebrates popular church hymns from the turn of the century. The program also includes Gershwin’s Rhapsody in Blue for solo piano and jazz orchestra, featuring Jeremy Denk as soloist.

Visit our Green Room page for information on our Opening Night Post-Concert Celebration.

Please note: These concerts are currently SOLD OUT. If you would like to attend one of these performances, please select the appropriate waiting list below and we will contact you should additional tickets become available.