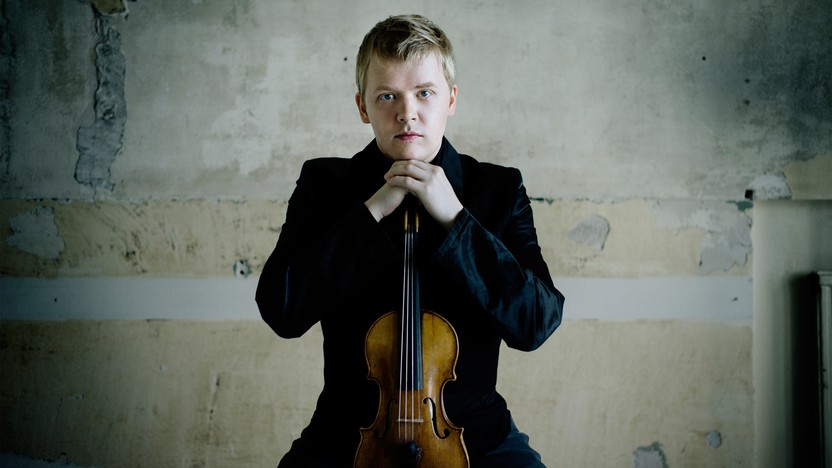 When the principal second violinist of the Esterházy Orchestra, Johann Tost, made plans to start a music distribution enterprise in Paris, Haydn offered him two new symphonies plus a dozen string quartets to resell. Tost, alas, was a bit of a scoundrel; he tried to pass off a symphony by Adalbert Gyrowetz as a third work by Haydn, and he was later implicated in a scheme to pirate, behind the composer’s back, Haydn’s manuscripts held in the Esterházy collection.

The Symphony No. 88 exhibits grandeur and breadth to match the preceding “Paris” symphonies. As in most of Haydn’s late symphonies, a slow introduction sets the stage; here, the dotted rhythms (a short-long pattern) of the opening chords suggest the character of French overtures from an earlier era. In the Allegro body of the movement, the violins begin with a figure suggestive of hunting horns, establishing material that lends the movement an al fresco air.

The Largo second movement, constructed as a theme with variations, holds the biggest surprise of this symphony. The opening statement, featuring solo oboe and cello, establishes a chamber-music intimacy. Then, forty measures into the movement, a fortissimo entrance by the entire ensemble adds the piercing force of two trumpets and timpani, whose absence in the first movement makes this point of arrival all the more thrilling.

The Menuetto also holds back a surprise. To complement the boisterous dance music of the main section, the contrasting trio introduces a rustic, droning texture, which supports exotic melodies in unusual modes. Closing the symphony on a high note, the finale hardly ceases its bouncing eighth-note pulse, and even its minor-key episodes exude buoyant charm.

Admirers of Mozart’s serenades will find much to appreciate in his five violin concerti, which together mark the pinnacle of his music for violin. In the late eighteenth century, the serenade genre, rooted in the tradition of musical courtship (think of the lover, supported by his mandolin-strumming friends, singing beneath his beloved’s window), expanded to include more public celebrations: weddings, graduations, and the like. Per Mozart’s contemporary J.A.P. Schulz: “The title ‘serenade’ is also used for purely instrumental compositions, which, to honor or congratulate specific personages, are performed at dusk in front of their houses… The composer must strive to write simple, flowing melodies, set primarily to consonant rather than dissonant harmonies.”

The violin concerti, all completed in the year before Mozart’s twentieth birthday, might be heard as an extension of the serenades that mark his early years in Salzburg (Eine kleine Nachtmusik, et al.). They are untroubled works, recalling the serenades in both their compositional style and idyllic character. Equally so, the serenades, a number of which feature virtuosic solo violin writing, foreshadow the concerti. Mozart biographer Maynard Solomon surmises that the third, fourth, and fifth concerti specifically “are the highest examples of his serenade style after it has been detached from the serenade proper and reconstituted within a separate genre.”

The Fourth Violin Concerto is set in D major: a logical choice of key for the glorification of the violin, as it capitalizes on the instrument’s natural resonance. The opening Allegro bespeaks an irrepressible joie de vivre immediately from its opening measures. The opening theme is as uncomplicatedly ebullient as a nursery rhyme: a martial succession of unison Ds and a giddy outline of a D major chord prepare the way for “simple, flowing melodies, set primarily to consonant rather than dissonant harmonies” indeed.

The Andante cantabile second movement responds to the gaiety of the Allegro with sublime beauty. Solomon describes this music as “inhabit[ing] a world of plenitude, [in which] beauty is everywhere for the taking. … [T]he beauties succeed each other with a breathtaking rapidity, their outpouring of episodic interpolations suggesting that we need not linger over any single moment of beauty, for beauty is abundant, it is to be found ‘here, too,’ and ‘there, as well.’” The concerto concludes with a playfully indecisive Rondeau: the meter vacillates between a graceful 2/4 and galloping 6/8 tempo, but the music’s prevailing lightness of spirit is assured.

The extraordinary Finnish violinist and newest SPCO Artistic Partner Pekka Kuusisto leads a program that spans centuries, continents and musical genres. Soulful string works by Sir Michael Tippett, Nico Muhly, and Bryce Dessner (from the American indie-rock band The National) are interlaced within the driving, pulse pounding rhythms of Action-Passion-Illusion, a piece by contemporary Estonian composer Erkki-Sven Tüür. In the second half, the musicians return to the core classical repertoire of Mozart and Haydn, but through the fresh and contemporary interpretive lens of Kuusisto.