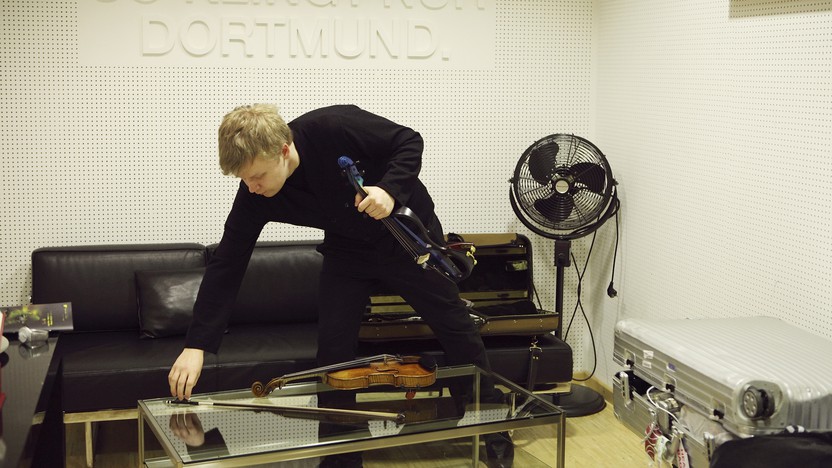 When Johann Sebastian Bach worked as a church organist in Weimar from 1708 to 1717, he had few opportunities to write or perform secular music with ensembles, even as his library overflowed with inspiration from abroad. The innovative sonatas and concertos being produced by Italian composers were just starting to arrive in trading hubs like Amsterdam and Utrecht, and the well-traveled members of Weimar’s royal court eagerly stocked up on the latest published scores and bootleg copies to expand their court musicians’ repertoire. Those foreign sources had an immediate impact on Bach’s style, even if his main outlet at the time was transcribing larger works for harpsichord.

Bach took a new job in 1717 as the music director for a young prince in Cöthen, and for the next six years his primary duty was to provide the court’s secular entertainment. With the support of a music-loving patron, and with top-notch professional musicians at his disposal, Bach finally put those Italian influences to use and produced many of his surviving concertos and sonatas, along with many more works that have disappeared.

When that prince married a woman uninterested in music, Bach began scouting other job opportunities. Back when he had traveled to Berlin in 1718 to buy a new harpsichord, he had met and performed for Margrave Christian Ludwig, Duke of Brandenburg; renewing that connection three years later, Bach sent what amounted to an unsolicited job application, in the form of six concerti grossi. To this day, those works are known as the  Brandenburg  Concertos, even though their noble namesake never so much as replied.

Bach’s scores elaborated on the template developed a generation earlier by the Italian composer Archangelo Corelli, who pioneered “grand concertos” for groups of soloists (usually two violins and cello) working within an accompanying ensemble of strings and basso continuo. Each of Bach’s examples tests a different configuration of soloists, including the radical example of the third  Brandenburg  concerto, in which every instrumental part functions as an independent solo voice apart from the shared basso continuo foundation.

The * Brandenburg* Concerto No. 3 includes three violins, three violas and three cellos; the first movement sends a three-note motive cascading through all the voices. (The spiritual significance of the number three in Christian theology was surely not lost on Bach, a devout Lutheran.) Instead of a full slow movement, Bach only notated two linking chords, leaving the performers the option of inserting an improvised cadenza. The concerto closes with a barreling Allegro finale, its tempo and character matching the reeling gigues that conclude most of Bach’s dance suites.

The Kings Theatre, Haymarket, London, was far more than a mere playhouse to the general public in the 1780s and 1790s. It represented a starry, ambitious, headstrong, inspiring and — doubtless — foolhardy spirit of artistic enterprise. For decades it had been home to the best Italian opera London could offer, attracting Europe’s finest singers. Its management changed often, but was consistently dynamic. They attempted to persuade Mozart to be a composer-in-residence, just as Handel had been earlier in the century. When the building burned down in 1789, they simply rebuilt it. When the Lord Chamberlain refused to license the new building, they simply ignored him and continued to present shows. And when the debts mounted to phenomenal heights . . . they simply watched them rise further, decade after decade. Even as the papers were publishing cartoons of the company’s performers begging in the streets, the Kings Theatre had all the glamour of a buzzing hub of cultural life. Mozart never came, but many major figures of the day did. Some we no longer recognize (Giovanni Andrea Gallini and Gasparo Paccheriotti, both celebrities in their time), but many are still famous: Cherubini, J.C. Bach, Sir John Soane and, of course, Haydn.

Haydn launched his second London residency with this symphony, presenting it at the Kings Theatre on February 10, 1794, just a week after his arrival. His first trip to London 18 months earlier had proved such a huge financial success that he needed no encouragement to return. (His London visits more than doubled the life savings he had accumulated throughout all his years as a servant of the Esterhazy family.) But Haydn also returned because of the sheer enthusiasm with which the public received him. For almost his entire professional life, Haydn had worked in relative obscurity, but now, in his late 50s he was being treated like a superstar. Even aristocrats paid homage. Haydn adored it enough to risk crossing a very unstable Europe to reach England.

Haydn did not write this symphony in London, but in Vienna. Upon his return from the first London trip, he had been saddened by news of Mozart’s recent death. Tremendous mutual respect and affection had united the two men in the later 1780s. They studied each other’s work and learned from each other’s example, and you can hear that here. It is often suggested that Haydn emulated Mozart’s liberal use of wind instruments. At the time, reliable wind players were a scarce commodity, leading many composers to deploy the barest minimum (two oboes and two bassoons, sometimes with two horns) and even then to make these optional extras; strings and continuo were the real core of any orchestral performance. In his music, Mozart gave the winds such a high profile that they became indispensable, almost like an autonomous chamber ensemble within the orchestra. In London Haydn had at his disposal an orchestra with excellent wind players, including two clarinets. He calls for them in all but one of his last six symphonies, and they add a soft mellowness to the sound. In this symphony, they act almost as soloists and offer many magical moments of arresting beauty.

Twin Cities audiences have a chance to hear this program that Artistic Partner Pekka Kuusisto and the SPCO will bring to New York’s Lincoln Center in May of 2020. Bach’s Third Brandenburg Concerto, with its rapid-fire counterpoint and interplay between each musician, serves as the inspiration for Anders Hillborg’s violin concerto, Bach Materia, written specifically for Kuusisto and his improvisational abilities. On the second half of the program SPCO musicians will lead symphonies by Prokofiev and Haydn. Prokofiev was inspired by Haydn and Mozart symphonies in writing his effervescent Classical Symphony, and there is no more compelling example of the classical symphonic form than Haydn’s Symphony No. 99.