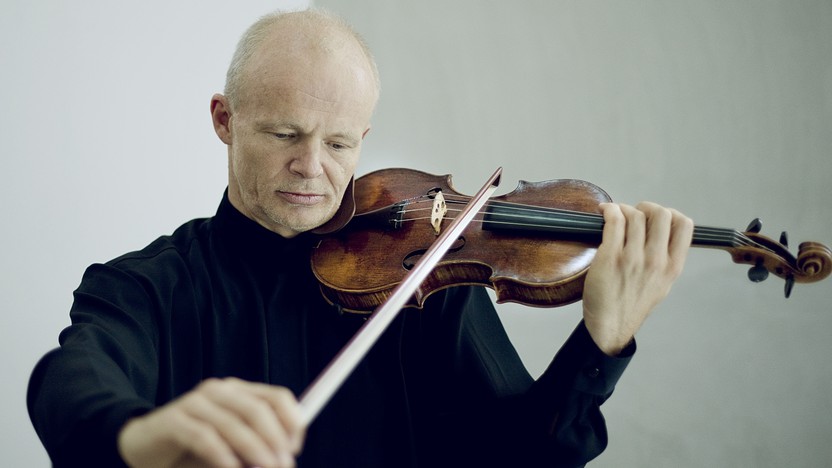 Bach likely composed his two extant violin concertos around 1730, not long after he agreed to lead Leipzig’s Collegium Musicum, founded in 1702 by a young Telemann. This talented amateur group gave weekly performances, often in the informal atmosphere of a coffeehouse, providing Bach a sociable venue for secular music.

Bach crafted his violin concertos using the ritornello structure popularized by Italians (especially Vivaldi) in which a main theme returns multiple times to punctuate the form. The essential theme of the first movement of the Violin Concerto No. 1 in A Minor emphasizes pairs of rising notes, first making a bold leap up the interval of a fourth, and then returning for a narrow rise of a half-step.

So much of the emotional tension in the Andante slow movement occurs in the simple but profound bass line: its steady pulses, its hopeful ascents, and its many long silences that leave the soloist with only the fragile support of violins and violas. The rolling triplet pulse of the Allegro assai finale is akin to the gigue (or, as it called in the British isles, the jig), the dance style that ends many of Bach’s instrumental suites.

Before Arnold Schoenberg became the teacher and trendsetter at the center of the “Second Viennese School” of composers who explored the wilds of atonality, he was a self-taught amateur steeped in the luxurious Romanticism of Franz Liszt and Richard Strauss. The closest he came to having a composition teacher was through his friendship with Alexander von Zemlinsky, and it was during their vacation together in 1899 that Transfigured Night emerged from three swift weeks of work.

Schoenberg’s great innovation in Transfigured Night was to apply the idea of program music, as found in the tone poems of Liszt and Strauss, to a chamber ensemble. Schoenberg’s original scoring for two violins, two violas and two cellos matched a format pioneered by Johannes Brahms, in whose hands the string sextet became a vehicle for pure chamber music with a Classical orientation. Instead of the usual abstract movements, Schoenberg created one continuous score in five sections, following the shape of the poem "Verklärte Nacht (Transfigured Night)" by Richard Dehmel, about a forlorn couple that, while walking on a moonlit night, works through the revelation that her pregnancy resulted from an affair.

The musical storytelling relies on the skillful manipulation of tonal harmony over the course of one long journey from minor to major. Supported by a nervous drone, the first section sets the course by plodding down the minor scale in lopsided, dotted rhythms. This stepping pattern becomes a familiar point of reference, returning in different forms to remind us of the couple and their fateful walk together.

The second section, beginning with an unexpected major chord, corresponds to the second stanza of the poem, in which the woman “confesses a sin to the man at her side: she is with child and he is not its father.” The music becomes agitated, smeared with rising chromatics, until the third section intervenes with music of a simpler and more somber character, linked to the section of the poem in which “she staggers onward.”

The third section ends on a minor chord, setting up the crucial moment: With a decisive pivot to a major chord, a cello melody gives voice to the man’s wish that his companion should “not burden her soul with thoughts of guilt.” A lustrous violin solo brightens the night, just as “the moon’s sheen enwraps the universe.”

The final section forms a tranquil coda in D major, basking in love’s warmth that “will transfigure the little stranger.” The stepping theme returns with new optimism, and shimmering arpeggios offer a parting view of “wondrous moonlight.”

Tickets to these concerts are currently only available for season ticket holders. Season ticket packages start at just $30 and subscribing gives you access to priority seating, free exchanges and more! Become a subscriber now. Individual tickets to performances will go on sale in late August.