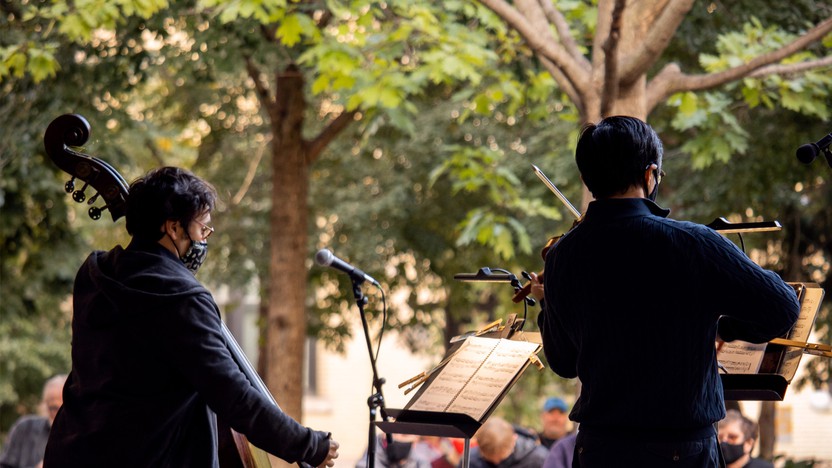 Antonio Vivaldi’s The Four Seasons makes a strong case as the Western canon’s most universally familiar music. Such widespread popularity is a double-edged sword: The Four Seasons’s ubiquity in popular culture has too often presented as harmless background music a fiendishly inventive work by a composer of terrific originality.

The concertos that make up The Four Seasons (Le quattro stagioni) appeared as the first four of twelve violin concertos published as Il cimento dell’armonia e dell’inventione (The Contest between Harmony and Invention), op. 8. Vivaldi composed them to accompany a set of four sonnets—“La primavera,” “L’estate,” “L’autunno,” and “L’inverno”—whose authorship is uncertain but generally attributed to Vivaldi himself. The sonnets’ tripartite structures align with the three movements of each concerto, which in turn provide vivid musical depictions of the corresponding text.

The Four Seasons evinces Vivaldi’s importance to the development of the Baroque concerto. His contributions to the genre, which total more than five hundred, defined the concerto form as a dialog between soloist and ensemble and established certain formal characteristics as standards in concerto writing. (They also established the concerto as a vehicle for instrumental virtuosity—fittingly so, given Vivaldi’s stature as one of the finest violinists of his generation; more than two hundred of Vivaldi’s concertos are for violin.) Vivaldi’s concertos served as significant models for no less than Johann Sebastian Bach’s Brandenburg Concertos, among other major works of the Baroque period.

But of equal importance to the formal innovations manifested in works like The Four Seasons are the breadth of their dramatic character and the extent of Vivaldi’s vision in imagining the expressive potential of the concerto form. The Four Seasons concertos are remarkable for their illustration of their subject matter, whether in depicting hunting horns and guns in Autumn or in the chilling texture of Winter, mimetic of the “cold in the icy snow/In the harsh breath of a horrid wind.”

Not long after George Frideric Handel became Kapellmeister in 1710 to George Ludwig, Elector of Hanover, those two Germans would find themselves making history in England. Handel, for his part, revolutionized the opera scene with Rinaldo from 1711, the first Italian opera written expressly for London. Meanwhile George, by virtue of the 1689 Bill of Rights that barred Catholic monarchs, became the unlikely heir to the British throne, as the great-grandson of King James I and the closest living Protestant relative to Queen Anne when she died in 1714.

George fired Handel from the Hanover position in 1713, leading to a brief falling out, but the two reconciled after George’s coronation, and Handel became a trusted source of music for the royal court. In 1717, when a conflict with his liberal-minded son (the future George II) left the king in need of some good public relations, he organized an outing on the River Thames and asked Handel to provide orchestral entertainment. On July 17, 1717, the river filled with boats, including a barge loaded with some fifty musicians. The whole flotilla rode the tide upriver to Chelsea, stopped for a supper, and then returned to Whitehall, with Handel’s new Water Music sounding all the while.

The suite heard here, published in 1733 as Mr. Handel’s Water Piece, traded on the enduring popularity of Water Music by arranging one of its overtures for trumpet and strings. The rest of the music is a mish-mash, including a final march adapted from the 1730 opera Partenope, and most likely Handel was not involved in the arrangement of any of it. Handel knew better than anyone how to squeeze maximum profit out of a good bit of music (his or even a competitor’s), and his publisher cranked out reams of music without any of the guardrails around intellectual property and provenance that we would expect today. The result is a very practical and idiomatic showpiece for trumpet, highlighting the bright and clear upper range of the instrument where it could play flowing melodies even in those days before valves made it easier to access all available pitches.

Circling Back seems to reflect the moment of its creation, as well as the hope that things are getting better. It feels like waking up. It feels like remembering something significant. It feels wistful but determined. The expression “circling back” conjures images of a flight and the sense that we had been driven from our course but are now returning to the path we had charted, to the hopes and ideas we had to defer. Thank you to The Saint Paul Chamber Orchestra, Cassie Pilgrim and Sarah Lewis for bringing this piece to life. I’m incredibly grateful to have had this opportunity to circle back to music-making with you.

George Walker was a vital American composer who was active right up to his death in 2018 at the age of 96. Decades before he became the first Black winner of the Pulitzer Prize for Music in 1996, he broke ground in 1945 as the first Black graduate of the Curtis Institute of Music, where he studied piano with Rudolf Serkin and composition with Samuel Barber. In an uncanny parallel with Barber, whose most celebrated music is still the Adagio for Strings adapted from the first String Quartet he wrote just after graduating from Curtis, Walker, too, is best known for the slow movement of the String Quartet No. 1 that he wrote in 1946. Originally titled Lament and dedicated to his recently deceased grandmother, Walker renamed the movement Lyric. Whether performed in its original quartet configuration or in his transcription for string orchestra, Lyric has become a fixture of American concert music.

When the 21-year-old Beethoven arrived in Vienna in 1792, Mozart had been dead less than a year, and Haydn — with whom Beethoven studied briefly — was in his prime. Under their long shadows, Beethoven spent his first years in Vienna mastering the “Classical” style, meanwhile earning a reputation as the city’s ranking keyboard virtuoso. If any one day marked his arrival as a composer of note, it must have been April 2, 1800, when he produced his first benefit concert at Vienna’s Burgtheater, the same venue where Mozart had presented highly successful concerts of his own in the 1780s. Besides leading an orchestra in a Mozart symphony and excerpts from Haydn’s oratorio The Creation, Beethoven performed one of his own piano concertos, and he debuted both the Symphony No. 1 and the Septet in E-flat, which stole the show.

In the spirit of Mozart’s serenades, the Septet was a musical confection with no higher aim than to entertain and delight its audience. (Well, it may have had one other aim: Beethoven was trying to gain favor with the work’s dedicatee, Empress Maria Theresa, who thought highly enough of the young composer that she recommended him a year later for an important ballet project, The Creatures of Prometheus.) In later years, Beethoven would back away from the success of his Septet, which remained one of his most popular works in his lifetime and which spawned numerous adaptations, including Beethoven’s own reduction for clarinet, cello and piano.

It would be wrong to discount the innovations that flow under the cheerful surface of the Septet, particularly in the novel use of a mixed ensemble of strings and winds. Just as Beethoven’s First Symphony attracted attention for emancipating the woodwinds from a supporting role, the Septet assembled the clarinet, bassoon, horn, violin, viola, cello and bass as a band of equals. The clarinet shares melodic duties with the violin, and the omission of a second violin opens sonic space for the accompanying textures of the horn and bassoon. The Allegro con brio body of the first movement makes the most of the sonic range, setting up contrasts among the elegance of a string trio, the breeziness of a wind trio and the full force of the miniature orchestra. In the slow movement that follows, some of the most sublime movements are those that cut against the instrumental typecasting, as when the bassoon and cello each climb into their upper ranges to deliver poignant lines.

The third movement, a Minuet, reuses a theme from Beethoven’s Piano Sonata in G, Opus 49, No. 2 (completed in 1796, its high opus number notwithstanding). For the fourth movement, the theme-and-variations structure invites myriad instrumental combinations, including spare textures for string duo and trio in the first variation and bare duets for clarinet and bassoon in the third.

In the quick Scherzo, the main motive takes its shape from the characteristic intervals of horn calls. The finale, in a bit of a twist, enters with a slow introduction, set in the parallel minor key. The Presto tempo soon brushes away that drama and tension, and the sprint to a buoyant conclusion only halts momentarily for a violin cadenza.

The Saint Paul Chamber Orchestra brings chamber music to the Mears Park bandshell in downtown Saint Paul’s Lowertown district. Antonio Vivaldi’s Summer violin concerto from his iconic Four Seasons starts the performance off with the SPCO’s Nina Tso-Ning Fan as soloist. George Walker’s lush Lyric is dedicated to his grandmother who passed away a year before it was written. New music by the “alluring” and “wildly inventive” (The New York Times) composer Viet Cuong conjures images of flight and the sense that we’ve been driven from our course but are now “circling back” to hopes and ideas deferred. Music by George Frideric Handel and Ludwig van Beethoven round out the performance.

There are currently no city or state requirements or recommendations regarding mask use or social distancing outside. We encourage audience members to use personal discretion and to respect the space and choices of those around them. People who are sick or exposed to someone with COVID-19 should stay home.

Please note: This event is free and open to the public. Tickets are not required for entry, but space is limited so please arrive early and bring chairs or a blanket for seating. Food and beverage will be available for purchase at the several restaurants surrounding Mears Park. Local businesses may require masks for entry.