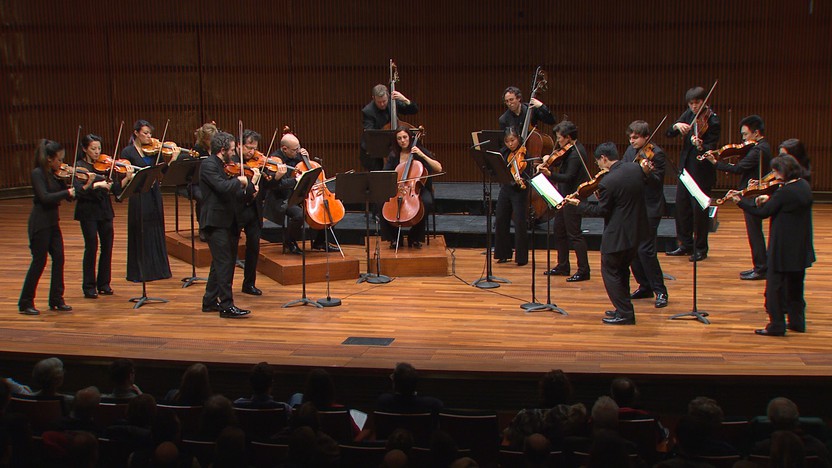 Although the concerto grosso originated in the late seventeenth century with Italian composers like Arcangelo Corelli, the form became popular in England in the early decades of the eighteenth century largely through publishers in London who reprinted music written by composers from the continent. After successfully printing Corelli’s Twelve Concerti Grossi, Op. 6, music publisher John Walsh collected several compositions by George Frideric Handel and printed them together in 1734 as a set of “concertos” called Op. 3 without Handel’s knowledge. Six years later, after acknowledging the success of the Op. 3 collection among the English public, Handel repurposed several excerpts from his own operas and concertos (and material “borrowed” from his contemporaries) and completed a full set of twelve, this time working directly with Walsh as his publisher.

Both collections by Handel use the standard concertino forces of two solo violins and solo cello in dialogue with each other and the full orchestra, or ripieno, but in Op. 3, No. 2, Handel also added two oboes and a bassoon. Throughout the first movement, both solo violins weave their lines together against the orchestral accompaniment and establish a pattern that continues in the largo movement, where instead two cellos gently accompany a lyrical oboe melody. The allegro recalls Handel’s imitative choral writing before launching into two dances, a minuet and a gavotte, that feature both oboes and bassoon. Though written years apart and compiled by an enterprising publisher, Handel’s mastery of the concerto grosso form shines through in each moment of surprise and delight.

Joseph Bologne, Chevalier de Saint-Georges, was a champion fencer before his twentieth birthday. He was also a renowned boxer, dancer, and marksman, but his real love was music, and his prowess with the violin allowed him to become the leader of a powerhouse orchestra in Paris and a personal instructor to Marie Antoinette. She nominated him to become music director of the Paris Opera in 1776, but the prejudices he had transcended up to that point finally proved to be too strong: the prima donnas at the opera refused to sing for a mixed-race maestro.

Bologne’s French father owned sugar plantations on the Caribbean island of Guadeloupe, and the son that he raised as his own was conceived with one of the African women he enslaved. Throughout his life, Bologne defied what should have been possible for a person of African descent under France’s Code Noir, and his determination to become an opera composer proved to be another hurdle that he cleared with gusto. He staged his comic opera L’amant anonyme at a duke’s private theater in 1780, and he also published the opera’s three-part overture as his Symphony in D Major (Op. 11, No. 2). The overture’s exuberant energy and singing melodies make it clear why Bologne has so often been called the “Black Mozart” — even though it was the young Wolfgang Amadeus Mozart who picked up important ideas during his time in Paris from watching the Chevalier in action, and not the other way around.

In its original form, Umoja, the Swahili word for unity and the first principle of the African Diaspora holiday Kwanzaa, was composed as a simple song for women's choir. It embodied a sense of 'tribal unity,' through the feel of a drum circle, the sharing of history through traditional “call and response” form and the repetition of a memorable sing-song melody. It was rearranged into woodwind quintet form during the genesis of Coleman’s chamber music ensemble, Imani Winds, with the intent of providing an anthem that celebrated the diverse heritages of the ensemble itself.

Almost two decades later from the original, the orchestral version brings an expansion and sophistication to the short and sweet melody, beginning with sustained ethereal passages that float and shift from a bowed vibraphone, supporting the introduction of the melody by solo violin. Here, the melody is sweetly singing in its simplest form with an earnestness reminiscent of Appalachian style music. From there, the melody dances and weaves throughout the instrument families, interrupted by dissonant viewpoints led by the brass and percussion sections, which represent the clash of injustices, racism and hate of the world today. Spiky textures turn into an aggressive exchange between upper woodwinds and percussion, before a return to the melody as a gentle reminder of kindness and humanity. Through the brass led ensemble tutti, the journey ends with a bold call of unity that harkens back to the original anthem. Umoja has seen the creation of many versions, that are like siblings to one another, similar in many ways, but each with a unique voice that is informed by Coleman’s ever evolving creativity and perspective.

“This version honors the simple melody that ever was, but is now a full exploration into the meaning of freedom and unity. Now more than ever, Umoja has to ring as a strong and beautiful anthem for the world we live in today,” says Coleman.

One of the leading musical luminaries of Paris in the late 1700s, Joseph Bologne, Chevalier de Saint-Georges enthralled audiences as a violinist, composer and conductor. His second symphony is an energetic and charming work for strings, oboes and horns, which also served as an overture to one of his operas. Valerie Coleman’s wind quintet, Umoja, which means unity in Swahili, is a fitting celebration of our ability to gather once again for the communal experience of hearing live music. The woodwind sound of the Coleman is contrasted by the symphonic nature of Pyotr Tchaikovsky’s Serenade for Strings, bringing the concert to a thrilling conclusion.