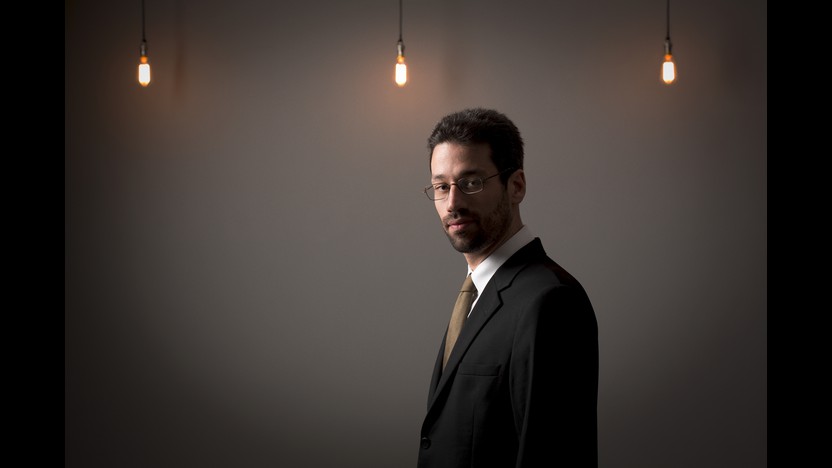 Decades later, after Schoenberg had settled into an uneasy life of exile in Los Angeles, a fallow period in his composing led him to re-examine his musical past. With some prodding by Fritz Stiedry, another Austrian expatriate who led an orchestra in New York, Schoenberg took up the Second Chamber Symphony once more, 33 years after he began it. He wrote to Stiedry, “I have been working on the Second Chamber Symphony for a month now. I spend most of the time trying to discover ‘What did the author mean here?’ My style has now become very consolidated and it is now effortful to unify what I wrote down back then, justifiably trusting in my feeling for form, with my current extensive requirements for ‘visible logic.’”

Schoenberg only made minor changes in the Adagio first movement, adjusting some of the accompanying textures and adding twenty new measures at the end. The fiery second movement, on the other hand, required about half new material, including a final, epilogue-like section. Instead of the individual string soloists of the First Chamber Symphony, a new orchestration using string sections contributed to a rich, full sound. The total effect is remarkably cohesive for a score assembled at opposite ends of Schoenberg’s continual evolution as a composer.

Not a concerto of sounds, but of resonances, near and distant. The soloist withdraws, denies his usual superiority, to reaffirm it on other levels. This does not seem to be a strange idea, for it touches upon and speaks to the transcendent essence of language/thought. As an instrument of consciousness, art can transform us. As I wrote years ago: “Music is the emanation and ornamentation of silence. The transfiguration of sound, the approach of the obscure, causes anxiety: that of not knowing how to distinguish between presence and absence.” The anxiety of learning is essential for the discovery of the universe, which is parent to us all.

Translation by The Cleveland Orchestra

On December 22, 1808, Beethoven presented a remarkable concert in Vienna. The four-hour extravaganza featured the public debuts of the Fifth and Sixth Symphonies, the Fourth Piano Concerto and the Choral Fantasy (composed as a showstopper for the occasion), as well as miscellaneous excerpts from the Mass in C, a rendition of the concert aria Ah! Perfido and some piano improvisations. Reports from the concert bemoaned the glut of music, the hall’s frigid temperature and a sloppy orchestra; the Choral Fantasy actually ground to a complete halt, at which point Beethoven returned to the beginning and prolonged the concert even further.

The Fourth Piano Concerto left spectators particularly baffled, and the work remained largely untouched until Felix Mendelssohn revived it in 1836. The mystery begins when the piano enters alone, spinning out a simple harmonic progression marked piano dolce (quiet and sweet). Then, after the piano leaves a chord hanging that by all expectations would resolve back to a stable point of arrival, the soloist withdraws and the strings enter in a totally foreign and exotic new key. Unexpected harmonic transitions continue to crop up throughout the first movement, keeping with the quizzical mood established at the outset.

In the central Andante con moto, a single line, scored across several octaves in the strings, engages the piano in a halting tête-à-tête in E minor. The final cadence flows directly to the Rondo finale, which again starts with just a whisper. The strings take the lingering memory of the pitch E as the start of the galloping tune, stating the theme first and then passing it to the piano. The melody begins with a repeated tone and an ascending arpeggio that anchors our ears in C major—except the actual destination of this concerto is to return to its starting key of G major. Amazingly, this main theme of the finale never begins in the “proper” key, even when it appears moments from the end, adding to the sense of sleight-of-hand that defines this most elusive of Beethoven’s piano concertos.

Pianist Jonathan Biss returns for the third installment of Beethoven/5, a five-year collaboration between Biss and the SPCO to commission five new piano concertos to be premiered alongside Beethoven’s piano concertos. This year the SPCO welcomes the venerable Italian composer Salvatore Sciarrino, who will be responding to Beethoven’s Fourth Piano Concerto in his own unique musical language. Matthias Pintscher, Music Director of the renowned Ensemble intercontemporain, returns to the SPCO to conduct this varied program, beginning with Schoenberg’s Chamber Symphony No. 2, a staple of the SPCO’s repertoire.