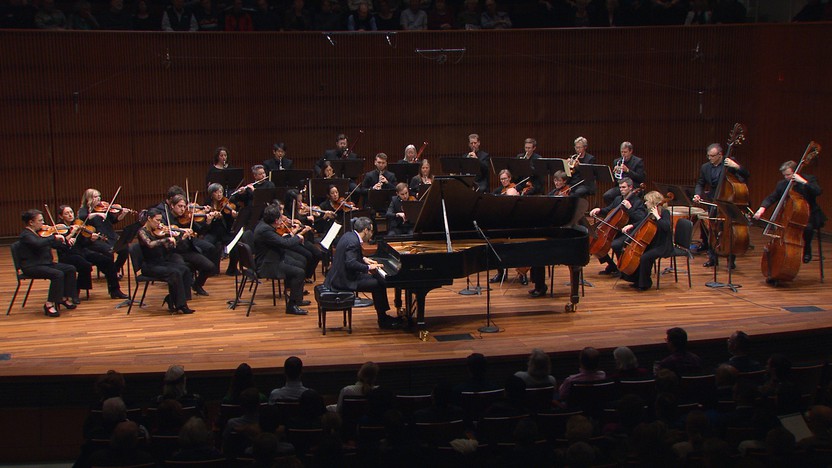 Heinrich Joseph von Collin’s play Coriolan—not to be confused with Shakespeare’s Coriolanus, based on the same story from Plutarch—debuted in Vienna in 1802. The drama follows a Roman general who defects to the enemy camp and raises an army against Rome, reaching the gates of the city before his mother convinces him to stop. The play was dormant by the time Beethoven wrote his overture in 1807, and his motivation for undertaking the project remains unclear. (It may have been meant to draw the attention of the new managers of Vienna’s main theater, or it was also possible that Beethoven was courting the playwright for an opera collaboration.) Beethoven’s overture appeared in conjunction with the play for one single performance in 1807, and since then it has lived on as a concert work.

The choice of key, C minor, foreshadows the fateful Fifth Symphony, composed the following year. Like that symphony, the Coriolan Overture generates powerful emotions from elemental material. The signature motive is a drawn-out C bursting into a short, explosive chord. The unresolved harmonies, like hanging questions, suggest a battle waging within the protagonist’s own conscience. After a developmental sequence of brittle motives over a running bass line and a return of the opening material, a final whiff of the sweet counter-theme gives way to even more brutal chords and pauses. The last phrases bow out quietly, ending with barren plucks on the keynote.

Watermark is woven from strands and patches and patterns of Beethoven's Third Piano Concerto. At times the connection is direct, as when the end of the first movement morphs into the final bars of Beethoven's own race to the cadence. At other points there is a more oblique and subtle kind of illumination of Beethoven's approach to serenity and tragedy, in the mirroring of the harmonic shifts and textures in Beethoven’s Third Concerto. Throughout the writing process, I was always inspired by Jonathan Biss's artistry, listening constantly to his recordings of the Beethoven Sonatas and other works, and to his wise insight into this music. The title, Watermark, refers in one sense to the research done (by musicologist Alan Tyson) on Beethoven's manuscript paper to determine the dates of composition for the Third Concerto, and more broadly to the notion of the origin of a document being expressed and embedded in subtle ways, like fragments of older language peeking through a palimpsest.

Ludwig van Beethoven wrote most of the Third Piano Concerto in 1800, in advance of a major debut concert in Vienna, but he chose to play an earlier concerto instead. After a few more years of tinkering, he unveiled the new concerto on an 1803 program that also included the premiere of the Second Symphony. For the concerto, Beethoven performed off a hastily written score that, in the words of his page turner, contained “almost nothing but empty leaves; at the most, on one page or another a few Egyptian hieroglyphs wholly unintelligible to me were scribbled down to serve as clues for him.”

The concerto opens with a definitive statement from the strings countered by a questioning response from the winds. In line with the style that would come to dominate Beethoven’s “middle” period, these themes separate into essential fragments to be examined from all angles, with various rising triads, falling scales, and timpani-like alternations appearing in the foreground and background.

The first E-major chord of the central Largo could hardly be more alien, or more luminous. The movement continues as a study in contradictions: humble yet ornate, foreign yet familiar, slow yet restless. A striking exchange occurs when the flute and bassoon trade childlike melodies over a simple plucked background, while the piano issues gusts of sound blurred by the sustain pedal.

The finale returns to the home key with a theme that lands heavily on an unresolved A-flat: the very same pitch that, in a different guise, defined the bright harmonies of the slow movement. (On the piano, A-flat is identical to G-sharp, the major third in the key of E.) Later in the movement, the same musical pun allows the slow movement’s key of E-major to return briefly to put a radiant new sheen on the finale’s main theme.

Pianist Jonathan Biss returned for the fourth installment of Beethoven/5, a five-year collaboration between Biss and the SPCO to commission five new piano concertos alongside Beethoven’s piano concertos. This year the SPCO welcomed the Pulitzer Prize-winning composer Caroline Shaw, who responded to Beethoven’s Third Piano Concerto in her own unique musical language.