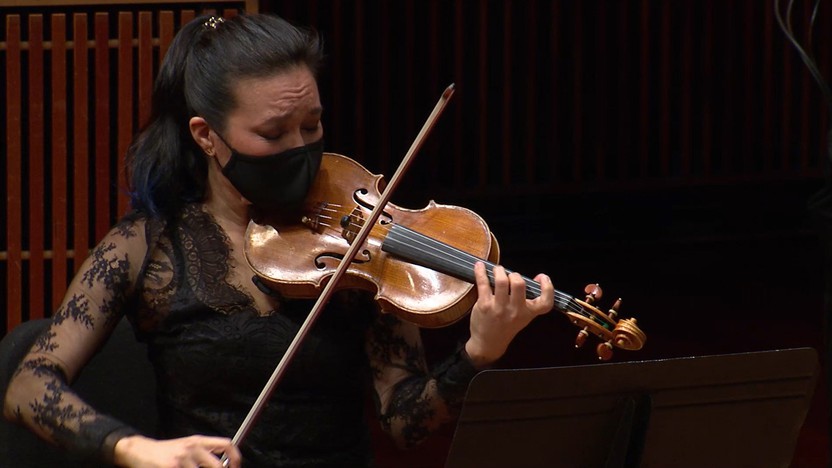 Juan Crisóstomo de Arriaga, often referred to as “the Spanish Mozart,” was born 50 years to the day after his Austrian forebear. While Wolfgang Amadeus Mozart had a paltry 36 years to accomplish his life’s work, Arriaga didn’t even reach his 20th birthday, cutting short a career of extraordinary promise. Building on the training he received from his father, he wrote his sole opera at the age of 13, and it appears to have been staged in his hometown of Bilbao, although most of the music has been lost. During his student years at the Paris Conservatory, the 18-year-old Arriaga added his only symphony.

As you’d expect from the work of a diligent student, Arriaga’s Symphony in D Major responds quite consciously to the precedents set by Mozart, Franz Joseph Haydn and Ludwig van Beethoven. The slow introduction begins as a carbon copy of Beethoven’s Second Symphony, but it veers in an independent direction as it starts to hint at an unexpected destination: a key setting of D-minor for the body of the first movement, rather than D-major as telegraphed by the opening.

Crafting the slow movement as a sweet Andante offered a place to try out some Mozartean melodies, along with some unexpectedly hearty chord voicings and thoughtful wind passages to show off their independence. The Minuetto dips into Haydn territory, with cheeky rhythmic play tripping up the basic dance pattern in three beats.

The finale sets itself up in D-minor with a melody strongly redolent of Mozart’s sighing theme at the start of the Symphony No. 40 in G Minor. A confident turn back to the major key for a final resolution shows Arriaga signing off with flair in what could have been the first of many world-class symphonies.

Maurice Ravel’s fascination with Spain ran deep, even beyond the trendy interest in Spanish folk culture among French composers of the era. Ravel’s mother, of Basque origins and raised in Madrid, implanted an early love of Spanish folksongs in her son’s ear, and he returned to those idiomatic melodies and rhythms throughout his career.

In 1907, while he was working on the large orchestral score Rapsodie espagnole and the opera L’heure espagnole, Ravel dipped into Spanish inspiration yet again when he was commissioned by a voice teacher at the Paris Conservatory to write a short work to help students familiarize themselves with modern music. The result was the Vocalise-étude en forme de Habanera, the first word indicating a melody to be sung without words. Once it was published in transcriptions to replace the voice with various instruments, it came to be known as the Pièce en forme de Habanera.

The Habanera was a dance with a slow, two-beat stride based on a Cuban style that hybridized French contredanse and Afro-Caribbean syncopations in the dance halls of Havana. Ravel had written an example back in 1895 that he recycled into Rapsodie espagnole, separate from this one with its hypnotic octaves in the piano part.

When Gabriela Lena Frank appeared on a list of “the top 35 female composers in classical music” compiled in 2017 by The Washington Post, chief critic Anne Midgette pointed to the significance of Frank’s “multiculturalism” and her practice of “mingling folk feeling with compositional sophistication.” Born in Berkeley to a mother of Peruvian-Chinese heritage and a father from a Lithuanian-Jewish background, Frank has embraced her ancestry, especially her connection to Peru, where she has traveled extensively. She wrote the following program note for Leyendas: An Andean Walkabout, a score she created for string quartet in 2001 and arranged for string orchestra in 2003.

Leyendas: An Andean Walkabout draws inspiration from the idea of mestizaje as envisioned by Peruvian writer José María Arguedas, where cultures can coexist without the subjugation of one by the other. As such, this piece mixes elements from the western classical and Andean folk music traditions.

Toyos depicts one of the most recognizable instruments of the Andes, the panpipe. One of the largest kinds is the breathy toyo which requires great stamina and lung power, and is often played in parallel fourths or fifths.

Tarqueda is a forceful and fast number featuring the tarka, a heavy wooden duct flute that is blown harshly in order to split the tone. Tarka ensembles typically also play in fourths and fifths.

Himno de Zampoñas features a particular type of panpipe ensemble that divides up melodies through a technique known as hocketing. The characteristic sound of the zampoña panpipe is that of a fundamental tone blown fatly so that overtones ring out on top, hence the unusual scoring of double stops in this movement.

Chasqui depicts a legendary figure from the Inca period, the chasqui runner, who sprinted great distances to deliver messages between towns separated from one another by the Andean peaks. The chasqui needed to travel light. Hence, I take artistic license to imagine his choice of instruments to be the charango, a high-pitched cousin of the guitar, and the lightweight bamboo quena flute, both of which are featured in this movement.

Canto de Velorio portrays another well-known Andean personality, a professional crying woman known as the llorona. Hired to render funeral rituals even sadder, the llorona is accompanied here by a second llorona and an additional chorus of mourning women (coro de mujeres). The chant Dies Irae is quoted as a reflection of the comfortable mix of Quechua Indian religious rites with those from Catholicism.

Coqueteos is a flirtatious love song sung by gallant men known as romanceros. As such, it is direct in its harmonic expression, bold, and festive. The romanceros sing in harmony with one another against a backdrop of guitars which I think of as a vendaval de guitarras (“storm of guitars”).

Before Maureen Nelson joined The Saint Paul Chamber Orchestra in 2016, she was a founding member of the Ensō String Quartet. The core repertoire of any quartet really begins with Franz Joseph Haydn, who fashioned the ensemble of two violins, viola and cello a chamber music mainstay, but that ruled out centuries of great music, including the entire Renaissance era (roughly 1400-1600). To remedy that gap, Nelson created her own Renaissance Suite, arranging music from a range of sources.

The set begins with a Spanish Villancico by Pedro Guerrero (born c. 1520), in the Arabic-inflected style of Moorish dance, or Moresca. As Nelson writes, “The text is vocalized by a crazed lover, demanding why the object of their desire is a slayer of hearts.”

The French chanson Mille Regretz was probably composed by Josquin des Prez (born c. 1450), expressing the “thousand regrets” of parting, and filling the music with pathos to match its lyrics that expressed “so much sadness and such painful distress.”

The final selection is Nelson’s fantasy on a Cachua, a traditional form of round dance from Peru that was transcribed and archived in Spain by a missionary bishop in the 1700s.

Explore the interwoven musical traditions of Spain and Latin America in this program curated by SPCO violinist Maureen Nelson. The program opens with the only symphony by the legendary “Spanish Mozart,” Juan Crisóstomo de Arriaga, followed by Andean-inspired music for string orchestra by Gabriela Lena Frank, a wind quintet by Maurice Ravel inspired by Havana, and Renaissance works quoting a Quechua (South American Indigenous) melody arranged by Maureen Nelson.