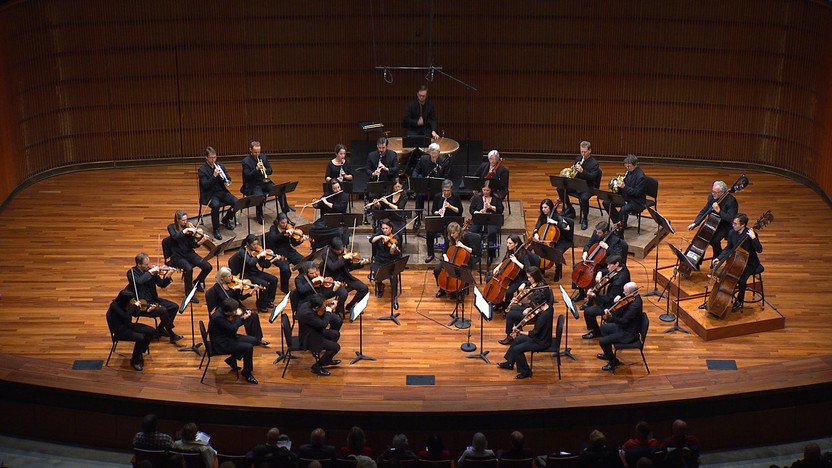 In 1877, a little-known Czech music teacher applied for the Austrian State Stipendium. The panelists for the artists’ grant included Johannes Brahms, by this time Europe’s most esteemed composer. Brahms took up the young composer’s cause, writing to his publisher Fritz Simrock: “As for the state stipendium… I have enjoyed works sent in by Antonín Dvořák of Prague. This year he has sent works… that seem to me very pretty… Play them through and you will like them as much as I do. Dvořák has written all manner of things: operas, symphonies, quartets, piano pieces. In any case, he is a very talented man. Moreover, he is poor! I ask you to think about it.” With Brahms’s endorsement, Simrock began publishing Dvořák’s music, immediately launching his international career.

Even his eventual celebrity would not extinguish the modesty of Dvořák’s beginnings. Years later, he wrote in reply to an admirer:

I must confess to you candidly that your kind letter took me a little by surprise, because its excessive servility and humility make it seem as if you were addressing some demigod, which of course I never was, am not, and never shall be. I am just a plain Czech musician, disliking such exaggerated humility, and despite the fact that I have moved a bit in the great musical world, I still remain just what I was—a simple Czech musikant.

Such modesty (“musikant” is a Czech term to describe amateurs or street performers) belies Dvořák’s sheer compositional prowess. A similar assessment could be made of the Romance in F Minor, Opus 11: a beguiling gem of a piece, whose immediate charms mask its subtle craftsmanship. Dvořák completed the Romance in 1877, the year of Brahms’s letter to Simrock; the work is based on the slow movement of his Fifth String Quartet, composed in 1873, while Dvořák was yet an unknown quantity to the great musical world.

The lilting four-measure motto presented at the outset permeates the entire Romance, guiding the listener through a series of raptly imagined episodes. The introduction alone, as unassuming as it is perfectly calibrated, is a clinic on orchestration: muted first violins, accompanied by wistful counterpoint in the seconds, followed by clarinet, then muted cellos; a quiet orchestral tuttigradually amasses, before horns, clarinets, a cuckooing oboe at last lead to the entrance of the solo violin, molto espressivo.

Light on bravura virtuosity, the Romance instead glorifies the violin in its soaring lyricism. Dvořák’s gifts for melody and timbre are on ecstatic display, revealing a profound understanding of the instrument’s soul—not only the violin’s, but indeed, each distinct voice in the orchestra. This is music lovingly executed, and with an acumen at odds with its creator’s modesty.

It’s been supposed that Sir William Walton’s legacy suffers from his being “Sir William Walton”—that is, that the stodgy sound of his name and knighthood creates false preconceptions about the character of his music. Born in Oldham in 1902, Walton absorbed a wide array of musical innovations throughout his formative artistic years. Although his foundation was decidedly English, springing primarily from his boyhood years as a chorister at Christ Church Cathedral, he was equally fascinated by a wide array of composers and musical styles. The range of his tastes, the composer Bruce Adolphe surmises, creates in Walton’s own music “the sense that George Gershwin and Harold Arlen meet Arnold Schoenberg and Elgar and Brahms and Strauss and they’re all having a big party.”

Despite such eclecticism, Walton’s music is both streamlined in its conception and uniquely his own. Such is evident in his Sonata for String Orchestra (originally String Quartet No. 2 in A Minor). When Sir Neville Marriner requested a work for string orchestra for the Academy of St. Martin-in-the-Fields, Walton obliged, not with a new composition, but with this transcription of his earlier quartet, composed between 1945 and 1946. (The 70-year-old composer enlisted his friend and colleague Malcolm Arnold to assist; Arnold completed the transcription of the last movement, under Walton’s supervision.) The first movement of the orchestral version deviates from the Quartet somewhat; the remaining three, though virtually note-for-note transcriptions, are nevertheless freshly reimagined by means of ensemble texture, at times utilizing the principal strings to achieve a sense of intimacy (prompting English composer Christopher Palmer to suggest relabeling the work “Concerto for String Quartet and String Orchestra”).

Witness the beginning of the Allegro first movement, a ruminative dialogue between solo strings, before its expansion to the full ensemble amplifies the conversation. So too is Walton’s assimilation of a broad range of styles on display here. Might the sharp-tongued second theme vaguely suggest a Bartók folk dance, displaced from the Rumanian countryside to rural England? This tune becomes the subject of a brief fugato passage in the movement’s central development section. When the first theme returns, it does so fueled by an injection of the fugato’s rhythmic verve.

The restless energy of the Allegro’s second theme extends into the following movement, a bracing, biting Presto. The Lento third movement’s heartfelt melodic character and pseudo-jazzy chords evoke Gershwin and Arlen, but strained through the modernism of Stravinsky, et al. The Sonata for Strings concludes with an exuberant rondo.

At twenty, Mendelssohn did what most young men from wealthy families did at the time: He embarked on a “grand tour” through Europe. Whereas Scotland inspired the stormy Hebrides Overture and the Scottish Symphony, a visit to sunny Italy sparked a symphony that, according to the composer, was “the jolliest piece I have ever done.” He sketched part of the symphony while in Italy in 1830–31, and he completed it in 1833 for the Philharmonic Society of London, the same group that had commissioned Beethoven’s Ninth Symphony. Mendelssohn’s bright impressions of Italy are borne out by the bouncing themes and running triplet pulse of the Allegro vivace movement that opens the symphony. The Andante con moto may have been influenced by a religious processional Mendelssohn witnessed in Naples, an image that fits with the movement’s walking bass and grave harmonies.

The moderate pace and smooth flow of the third movement resemble the minuets native to the symphonies of Mozart and Haydn, as opposed to the more rambunctious scherzos popularized by Beethoven. For the symphony’s whirlwind finale, Mendelssohn borrowed the lively rhythmic patterns of the saltarello, a folk dance from central Italy defined by its fast triplet pulse and its leaping movements.

New SPCO violinist Maureen Nelson opens the program with Dvořák’s Romance in F Minor for Violin and Orchestra. Next is William Walton’s Sonata for String Orchestra, a transcription of his String Quartet in A Minor that the 20th century English composer completed with his colleague Malcom Arnold. The concert closes with Mendelssohn’s beloved Italian symphony.

The winners of the 2017 SPCO Youth Chamber Music Competition, the Donovan Quintet, will perform in the Target Atrium of the Ordway Center during Fanfare preceding the Friday, April 28 performance of Mendelssohn’s Italian Symphony. The members of the quartet are Nadine Manske (violin), Cate Carson (violin), Edwin Patrick Thatcher Donovan (viola), Christopher Kwon (cello), and Nicholas Scheel (cello). They will be performing the third movement of Schubert’s String Quintet in C Major, D.956.

The annual competition is sponsored and coordinated by the Friends of the Saint Paul Chamber Orchestra, the volunteer organization that supports The SPCO through educational, social and fundraising activities. Partnering with them are MNSOTA (Minnesota String and Orchestra Teachers Association), and MacPhail Center for Music. To learn more about the competition and to hear the rest of this year's winners, visit www.spco-ycmc.org.