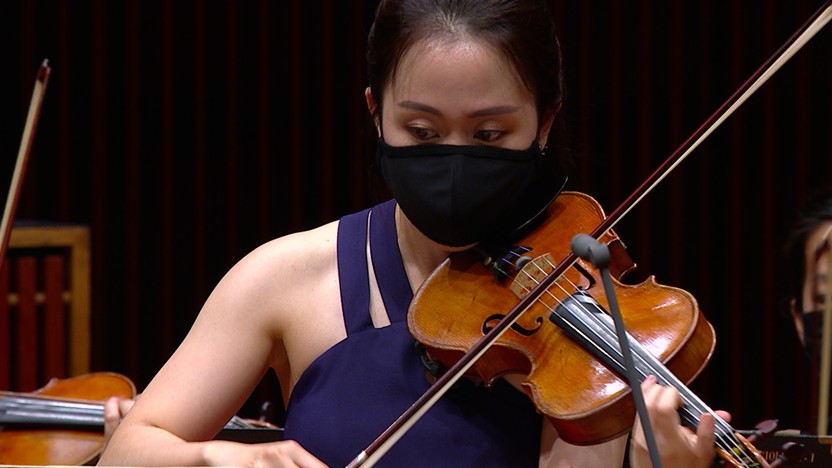 Growing up in the musically fertile city of Leipzig, Clara Wieck blazed through a rigorous curriculum of piano, composition and ear training devised by her father, the noted pedagogue Friedrich Wieck. Clara made her public debut at age nine, the same year an 18-year-old law student with musical inclinations, Robert Schumann, moved into the Wieck household to take intensive piano lessons. His piano career fizzled out after a hand injury, but 11 years after he was first enchanted by Clara’s talents — and after overcoming a bitter and protracted legal battle with her father — the struggling composer and journal editor, Robert, was able to marry the budding superstar pianist, Clara.

Clara found a way to keep up a concert career while raising children and caretaking her husband living with a mental illness, but she never resumed the pace of composing that peaked during her teenage years. Though small in quantity, the works from her married years are superb in quality, a sign of the high level of musical discourse and mutual respect in the Schumann family. She composed the Three Romances for Violin and Piano in 1853 for an upcoming tour with the young Hungarian violinist Joseph Joachim, a significant new addition to the Schumann orbit. (That same year, Joachim introduced another young friend to the Schumanns, Johannes Brahms, who remained one of Clara’s closest confidantes for the rest of her life.) The Three Romances were among Clara’s final works, coming not long before Robert’s psychiatric breakdown in 1854. Even after he died in 1856 and she continued her historic career as a pianist, she abstained from releasing any new compositions during the forty years she survived him.

The instrumental form of the Romance had its origins in a simple, sentimental style of song. Clara wrote a number of Romances for solo piano, as well as this set of three with violin. The first, in a subdued, walking pace, engages the violin in song-like melodies over a bed of lush, free-ranging piano harmonies. The second strikes up an Allegretto tempo and exchanges coy musical gestures, including elegant trills and playful grace notes. The “quick and passionate” finale uses rapid figurations in the piano to amplify the heated emotions.

Louise Farrenc, already an accomplished pianist, earned a coveted slot at the Paris Conservatory when she was 15. Female students were barred from training as composers, but the composition teacher Anton Reicha recognized Farrenc’s talent and gave her private lessons that continued after she got married at seventeen and left the conservatory.

Marriage often spelled the end of a composing career for even the most talented young women of her century, but Farrenc married a man who encouraged her to keep writing, and who was able to use his access as a music publisher to advance her interests. She also leaned on her own fame as a pianist, bolstered by her eventual appointment to be the only woman on the permanent faculty of the Paris Conservatory. Most of her early compositions were written for solo piano, and her later works emphasized chamber music that featured piano parts she would perform herself.

In writing a score to perform with fellow faculty members at the conservatory, Farrenc completed a chamber work in 1852 that was actually the first in what became a significant chamber music genre, the sextet of piano and winds. (The woodwind quintet itself was a relatively recent phenomenon, spearheaded by Farrenc’s old teacher Reicha.) Wolfgang Amadeus Mozart had written a quintet for a similar configuration, missing only a flute, and like Mozart, Farrenc constructed the score to resemble a mini-concerto with the piano in a starring role. Cutting against the grandiose and operatic tastes of her age, Farrenc was devoted to the earlier ideals of the Classical age, and her opening Adagio bristles with taut figurations and nimble transitions that could be mistaken for Ludwig van Beethoven or Felix Mendelssohn (another 19th-century keeper of the Classical flame).

The winds begin the Andante sostenuto middle movement, setting up a theme that the piano answers alone with added sweetness and decorative flair, in a continuation of the concerto-like focus of attention. The finale, with its serpentine themes and roiled textures, builds upon a harmonic pattern that is a recognizable offspring of Mozart’s turbulent Symphony No. 40 in G Minor, a work that also left a strong imprint on her earlier Symphony No. 3 in the same key. This historical devotion didn’t exactly ingratiate her to progressive French musicians who sought independence from the Germanic sphere, but through the lens of history we can finally appreciate Farrenc for being herself, leaving behind a small but essential body of music that ages as well as the best French wines.

Growing up in coal mining country in South Wales, Hilary Tann became attuned to the rolling hills and rich history of her surroundings. She went on to study at the University of Wales at Cardiff and Princeton University, and she eventually re-rooted in the Adirondack foothills to teach at Union College in Schenectady, where she is now the John Howard Payne Professor of Music Emerita.

Tann originally composed The Walls of Morlais Castle in 1998 for a trio of flute, guitar and cello, and she revised it two years later for oboe, viola and cello. The title comes from a legendary site near her birthplace: Morlais Castle, a remote outpost that was destroyed in 1314 by Welsh rebels who rose up against the English King Edward I. “Only ruins remain,” Tann wrote in a program note. “In fact, in many places, it is almost impossible to tell whether a particular mound of earth and stones is part of the rocky, bare landscape or part of the old castle walls. At one point a protruding piece of wall is evident. The rhythmical placement of the stone bricks in the partial wall lies in contract to the haphazard placement of the rocks in the surrounding scree.”

Tann’s sparse and atmospheric trio was “inspired by this contrast — a contrast between ruined castle walls and a landscape naturally strewn with rocks. Also within this image is an implied contrast between the hustle and bustle of the former castle and its present bleak appearance, where the site of the castle is practically indistinguishable from the natural contours of the high moorland.”

Born in Sweden into a highly musical and cultured family, Valborg Aulin went from taking piano lessons with her grandmother to enrolling at the Swedish Royal Academy of Music at 17. She received a boost early in her professional career when she won a grant named after the Swedish opera singer Jenny Lind, allowing her to study in Paris, including composition lessons with Jules Massenet. Meanwhile Aulin’s younger brother Tor became a successful violinist and the founder of a string quartet, and their collaborations formed the bedrock of her composing and performing career. He eventually moved on from quartet life to become a well-regarded conductor and composer, but professional routes of advancement were limited for his sister. She ended up moving to the midsized city of Örebro in 1903 to teach piano lessons and play the organ, and she never composed again.

Aulin’s prime composing years were her twenties, as evidenced by the remarkably mature String Quartet No. 1 that she wrote at 24. Even though she was a pianist herself, she displayed a knack for idiomatic string writing and a comprehensive grasp of the tradition-minded chamber music lineage that Johannes Brahms and Antonín Dvořák carried forward from Wolfgang Amadeus Mozart, Franz Joseph Haydn and Ludwig van Beethoven.

Splashes of folk-like material and modal harmonies give Aulin’s Intermezzo a whiff of local Swedish color, while transitions like the seamless pivot to the Andante espressivo third movement show Aulin to have mastered the more contemporary trend of unifying a multi-movement abstract work into a larger cycle. The finale, in a throwback to peak Classical style, whips up a frenzy using the staggered entrances of a fugue before settling into a fiddle-like theme, imparting an outdoorsy charm to this urbane quartet.

SPCO violinist Eunae Koh curates a program of composers from the Romantic era to the present day inspired by emotional and natural landscapes. Clara Schumann’s Three Romances and Louise Farrenc’s Sextet showcase the virtuosic talent of both composers who were celebrated pianists and influential advocates for their contemporaries. An evocative work for oboe, viola and cello by living composer Hilary Tann is inspired by a ruined castle in Wales. The program ends with a jubilant, but rarely performed, string quartet by Swedish composer Valborg Aulin.