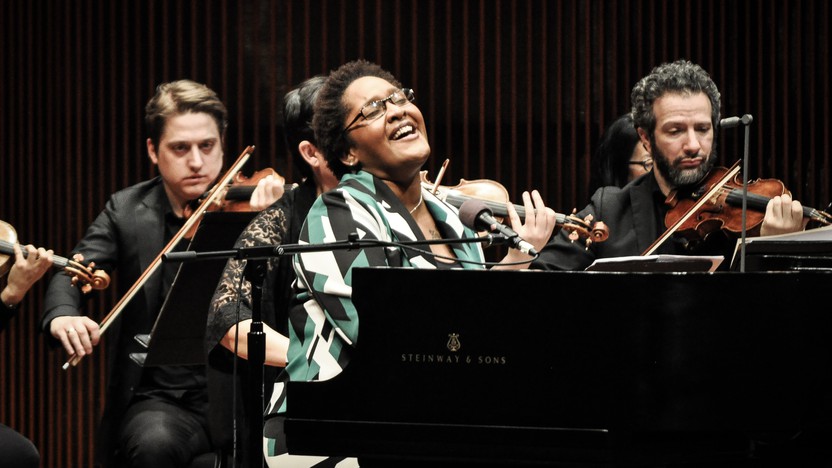 Commissioned for the SPCO by community supporters Bill and Susan Sands in collaboration with the American Composers Forum.

Born into a musical family in the historically Black neighborhood of Rondo in Saint Paul, PaviElle French has brought her lifelong influences from ‘70s soul and R&B into her wide-ranging and powerful work as a singer, songwriter, poet and theater artist. After she approached The Saint Paul Chamber Orchestra for a possible collaboration, she embarked on her first foray into concert music in 2018 with A Requiem for Zula, an orchestral song cycle that honored her late mother.

When SPCO supporters Bill and Susan Sands decided to commission a new work for the orchestra in honor of their fiftieth anniversary, they entrusted French with the assignment and encouraged her to respond to the commission in any way that was meaningful for her. French worked on the resulting score, The Sands of Time, in a world before the Covid pandemic, and before the murder of George Floyd, events that have only deepened her resolve to use her music in service of human connection and justice. As in her first piece for orchestra, French collaborated with the arranger Michi Wiancko, but after steeping herself in the principles of orchestration and the ranges of concert instruments, French took on the responsibility of distributing her music into the orchestral parts herself, using her keyboard to record layer upon layer in Apple’s GarageBand software.

Through meetings where she got to know Bill and Susan Sands, French was inspired to have her first movement deal most directly with romantic love. From the beginning of this song that shares its punning title with the cycle as a whole, “Sands of Time,” French speaks to us, the audience, as a knowing guide: “I’ve been thinking, y’all,” she sings, “about what love has taught me this far.”

The second song, “Give Me Your Love,” pivots to an interrogation of what disrupts love — a sentiment inspired specifically by the former president. “Your finite words of hurt and hatred won’t pollute my mind or change my hope for unification,” she sings. As an orchestral interlude takes flight, she invites us along, shouting, “Hold on y’all! Change is coming!”

In an interview, French spoke about how, in the years since the deaths of her parents, she has been on a journey “to love myself and to like myself, and to understand why I am the way I am, and be investigative and introspective, and to unlock core memories and fully love my whole, total being.” She articulates aspects of this brave emotional work in the third song, “Breaking Free,” where she sings, “It’s overwhelming to have to look so deep inside. I wanna break free from my iniquity.”

The next selections explore other facets of love that animate French’s life and music: “the love for my freedom of thought and freedom of speech, and the persistence of life. I was thinking about all the ways that love works, whether it is platonic or romantic or agape.” The sense of freedom comes through in the fifth song, “Me Being Me (Is Revolutionary).” A celebratory song, “The Dance of Life,” encourages us all to “be ambitious and assertive in the dance of life. There’s no room for any fear with an aura that’s so bright.” After an instrumental dance interlude, the cycle closes with a reprise of “Sands of Time,” bringing this journey of love back to its interpersonal point of origin.

French spoke about how much she learned from her mother, an educator and community activist, and her father, whom she described as “more hotheaded and political” and deeply involved in community action. As she sees it, “People can hear the truth if you can give it to them in a way that they can hear it. The way I approach music is that I am going to make it so beautiful and so lush and so honest and vulnerable and authentic that you have to hear it.”

For the 2021.22 season finale, we joined Saint Paul based composer, singer and pianist PaviElle French for the world premiere of Sands of Time, a work that celebrates musical manifestations of love in all its forms.   The concert concluded with Ludwig van Beethoven’s Fourth Symphony, an 1806 work evoking the spirit of Beethoven's onetime teacher, Franz Joseph Haydn. For us, it capped a concert season unlike any other, in which we gradually welcomed audiences back to in-person concerts.

Masks will not be required, but will be welcomed and encouraged. Proof of vaccination, booster or a negative COVID-19 test result will no longer be required. (N95, KN95, KF94 or surgical masks) are required regardless of vaccination status. More Information