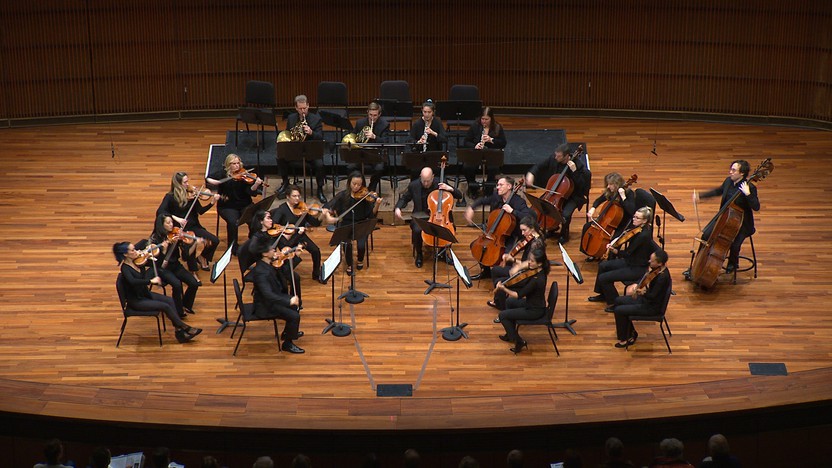 Thomas Adès only dedicated himself to composing at age nineteen, a year after earning second place in the BBC’s Young Musician of the Year competition as a pianist. In his twenties, he rose to the top echelon of contemporary music, causing a stir with the risqué opera Powder her Face (1995) and becoming the youngest ever winner of the prestigious Grawemeyer Prize for his orchestral work Asyla (1997).

Another early Adès work that has held its lasting place in the repertoire is his first string quartet from 1994, Arcadiana. As the Merriam-Webster dictionary tells us, “English speakers often use arcadia to designate a place of rustic innocence and simple, quiet pleasure.” Adès’ Arcadiana is a study of such places — some tangible, and others as rendered by composers and other artists. In a preface to the score, Adès simply referred to “more local fields” as his inspiration for the tranquil sixth movement, which takes its name from a very old name for England, Albion.

Like many young German composers in the aftermath of World War I, Karl Amadeus Hartmann wrote sassy, ironic music that exploded tired Romantic conventions and jabbed at modern politics and society. Such cultural activism flourished during the freewheeling days of the Weimar Republic, but the climate shifted with the Nazi takeover in 1933. Many composers went into exile, including Kurt Weill and Hanns Eisler, who both settled in the United States. Others ended up in prison or worse; Erwin Schulhoff, to name one great talent, died in a concentration camp. Hartmann was one of the very few anti-fascist composers who survived World War II without capitulating to the Nazis or fleeing. He prevented performances of his music in Germany, but he continued to compose new works that drew upon Hebrew melodies, Communist songs, and even banned scores by his compatriots. It was a brave and perhaps foolhardy resistance, but, as Hartmann himself wrote, “No artist, unless wishing himself written off to nihilism, can sidestep his commitment to humanity.”

For the Chamber Concerto that Hartmann completed in 1935, he acknowledged that his inspiration came from the Hungarian composer Zoltán Kodály, to whom the score is dedicated. Even without that information, a listener familiar with Kodály’s masterpiece written two years earlier, Dances of Galánta, might recognize a strong resemblance between the central themes in each work’s introduction. The scores also share a structure that progresses through a series of related dance episodes, including plenty of high-energy music steeped in the Magyar culture of central Europe. Even with so many unabashed references to a peer’s work, the Chamber Concerto ends up having a strikingly original sound, due in large part to its scoring. The clarinet takes a leading role, and a string quartet is set apart from the rest of the string orchestra, in the manner of a concerto grosso. This multilayered approach yields surprising results, like how the clarinet melds into the background amid the long-lined counterpoint and drawn-out harmonies of the closing Fantasie movement.

When Prince Nikolaus Esterházy completed a lavish country palace in 1766, the workload for his tireless Kapellmeister, Franz Joseph Haydn, increased dramatically. The “summer” seasons at the estate stretched to be nearly year-round, and all the while Haydn had to produce operas, provide music for church services, mount concerts, and attend to any other musical needs for his insatiable patron. “In Eszterháza,” Haydn lamented/boasted, “I was forced to become original.”

The symphony as we know it was in its infancy when Haydn took up the genre in the early 1760s. A decade and some forty symphonies later, he continued to push the boundaries in all sorts of directions: more instruments, more emotions, even more movements. The Symphony No. 43 was less outwardly radical than the two that followed — both examples of symphonies in minor keys that reflected the trend of Sturm und Drang (“Storm and Stress”) showing up in various art forms of the era — but even this seemingly placid Symphony in E-flat Major contains a multitude of original ideas. The first movement is an unusually expansive example of a sonata-form movement constructed essentially out of one main theme (recognizable by its repeated keynote), a specialty of Haydn’s. The same repeating note takes on a new context in the main theme of the Adagio, and a minor-key episode that obsesses over that repetition in a short-short-short-long rhythm makes plain how much Ludwig van Beethoven owed to Haydn, his onetime teacher.

Lo and behold, the Menuetto (another Haydn signature, inserted within the original three-movement symphony template) is built around a theme that repeats the same note, E-flat. After three movements celebrating the joys of musical sameness, the finale brings an explosion of kinetic activity, building restless themes out of long chains of arpeggios and scales. The source of the symphony’s nickname is unknown; might it be that this fleet-footed music reminded some earlier listener of Mercury, the winged messenger among the Roman gods?

The hushed tones of Thomas Adès’ string quartet O Albion creates a watercolor backdrop for the symphonic architectures of Karl Amadeus Hartmann and Franz Joseph Haydn. Atop this cloudlike aura brims the Chamber Concerto of Hartmann, widely recognized as one of the 20th century’s great symphonists, showcasing the dynamic versatility and grandeur of smaller ensembles. Ending the evening is Haydn’s Symphony No. 43, a work that highlights the delicate balance between the winds and strings.