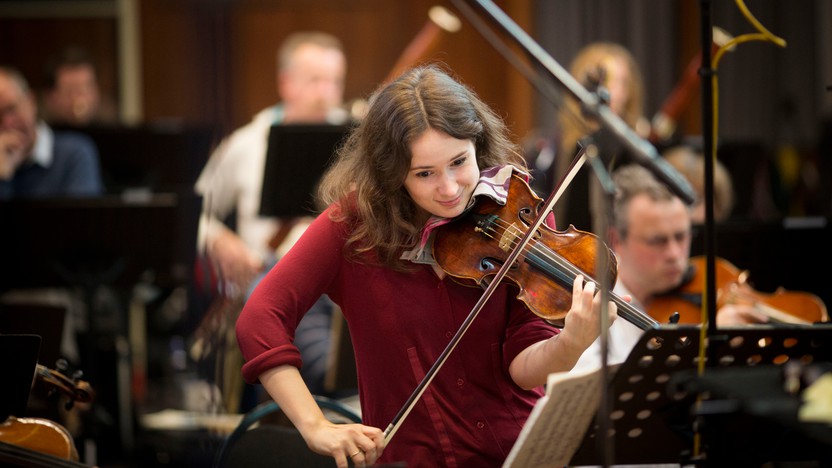 When commissioned for a new work for the Philadelphia Orchestra in 1966, Alberto Ginastera revisited a previous composition of particular personal importance, expanding his String Quartet No. 2, composed in 1958, into a Concerto for Strings. The return to the Quartet entailed more than mere transcription: Ginastera struck the first of the quartet’s five movements, reshuffled the remaining four, and revised various passages in addition to expanding the instrumentation to string orchestra.

The work, both as Quartet and Concerto, demonstrates the neo-Expressionist language of what Ginastera himself determined to be his third creative period, beginning in the year of the Quartet’s completion. His music from 1958 onwards moved away from the Argentine nationalist impulse of his earlier work towards the serialism of Schoenberg and Webern. The Quartet signals the advent of this chapter in Ginastera’s musical evolution, integrating the characteristics of his existing language with new, modernist concerns. It is a serial work, which nevertheless evokes Argentine folk music in its melodic character and rhythmic vigor—elements retained in the Concerto.

The Concerto’s first movement is a set of variations featuring the orchestra’s principal strings. It derives from the Quartet’s slow movement, marked Libero e rapsodico. To lyricism and rhapsody, Ginastera’s harmonic and textural ideas add an evocative pungency. The Scherzo fantastica mines further textural possibilities, employing col legno (playing with the wood of the bow, rather than the hair), sul ponticello (bowing at the bridge, producing a haunting, glassy sound), harmonics, and plucked glissandi to create a piquant sonic tapestry. It is a refreshingly modern conception, treating sheer timbre rather than melodic idea as its primary material.

Following the sparse textures of the first two movements, Ginastera voices the Adagio angoscioso’s long, keening lines with the weight of the full ensemble, infusing them with an overwhelming dramatic power. The Concerto’s Finale furioso, with its relentless fusillade of repeated notes outlined by sharp pizzicati, might recall Bartók, just as the work as a whole nods to the Second Viennese School. But each of these comparisons is ultimately insufficient. While the Concerto for String illustrates the Ginastera’s masterful synthesis of a wide palette of compositional techniques, it more so reveals a compelling artistic vision that is uniquely his own.

This work was commissioned by the celebrated Moldovan violinist Patricia Kopatchinskaja, with whom I share an extraordinary musical connection and intense friendship.

The score is a kind of internal memory map, which moves through expressive imaginary landscapes, based on some of the most powerful forms of Andalusian Flamenco, such as "Soleá, Soleá por Bulería o los Tangos flamencos." After an introduction 'con fuoco' [which in Italian means "with fire"] a succession of descending scales built on fantastical chords lead us into that memory of fire that is the expressive vocalization of 'Soleá'. Moments of great intensity alternate with the ecstasy of contemplating a celestial design, an internal sky plagued by bright stars (the trilling notes on the violin). Two cadences of the violin solo are a contrasting natural sound articulating the architecture of the work. Flamenco dancing—rooted in percussion—here represents material being, the beat and the outer shape of the torn soul that musically resonates in this work.

In addition to the written music of the last thousand years, the other great source of music is folklore, which is handed down through generations by tradition and without notation. My parents are folk musicians, and so this program has to include some real folk music. In 1914, at the suggestion of a singer, Manuel de Falla arranged several genuine folk songs for voice and piano. They became de Falla’s greatest success and were also arranged by Paul Kochanski for violin and piano. De Falla uses elements of Spanish flamenco music and the piano part unequivocally imitates the guitar. Jota is a light-hearted love song, Nana is a lullaby, and in Polo, we hear the rage of a cheated wife, furious and desperate: “I have a pain in my heart, Ay? I cannot tell anybody! Damned be love, and damned the one who made me understand this, Ay?”

Manuel de Falla was born in the port town of Cádiz in southwestern Spain, an area with rich Moorish and Gypsy legacies. He first studied piano with his mother, and later enrolled at the Madrid Conservatory. Early piano works and zarzuelas (a type of Spanish musical theater) failed to distinguish Falla, and no company would mount his prize-winning opera La vida breve. Fed up with his homeland, he moved in 1907 to Paris, where he circulated with Debussy, Ravel, and Dukas and adopted a touch of French impressionism in his musical language. At the same time, French interest in Spanish folk music, seen in such works as Ravel’s Rapsodie espagnole (1907–8) and Debussy’s Iberia (1905–10), encouraged Falla to explore his own native roots.

With the outbreak of World War I in 1914, Falla returned to Spain and enjoyed the triumph of the long-overdue Madrid premiere of La vida breve. A few months later, he began El amor brujo (Love, the Magician), a gypsy-themed blend of song, dance, and theater featuring the talents of Pastora Imperio, a star flamenco dancer. Using a libretto credited to the theater impresario Gregorio Martínez Sierra (more likely ghost-written by Sierra’s wife, María Lejárraga), Falla crafted gypsy-inspired songs and dance episodes to tell the story of Candelas, a girl haunted by the ghost of her dead lover. The original 1915 production, starring Imperio and her family with a small accompanying chamber ensemble, received mixed reviews, and Falla revised El amor brujo the following year, excising spoken dialogue and reworking the score for full orchestra. He revisited the work again in 1925, creating a one-act ballet suite with songs for mezzo-soprano, the version commonly performed today.

El amor brujo opens with a fanfare-like proclamation from a muted trumpet, its piercing clarity reinforced by high woodwinds and piano. The scene fades to a cave at night, with trembling, ominous music. The vocal soloist first appears in The Song of the Broken Heart, composed in a gut-wrenching style that recalls the cante jondo (“deep song”) tradition of Flamenco music. The appearance of The Apparition—the ghost of the gypsy girl’s dead lover—leads to the Dance of Terror, with its stuttering main theme. The tender calm of The Magic Circle: Romance of the Fisherman breaks with the tolling of the clock At Midnight, heralding the ballet’s most famous number. The Ritual Fire Dance, with its sinuous themes and thumping rhythms, is meant “to drive away the evil spirits.” A short scene with florid oboe and flute melodies sets up the next vocal selection, the Song of the Will-o’-the-Wisp. The song compares love to that mysterious phenomenon—known in Spanish as “fuego fatuo,” or foolish fire—that seems to follow its observer and then disappear when approached. The Pantomime brings back the music of the introduction, pairing it with a romantic melody in an off-kilter 7/8 meter. The Flamenco strain returns in the Dance of the Game of Love, and then the scene brightens with the sound of The Bells of Dawn, cheered on by the singer’s exclamation that “happiness is returning!”