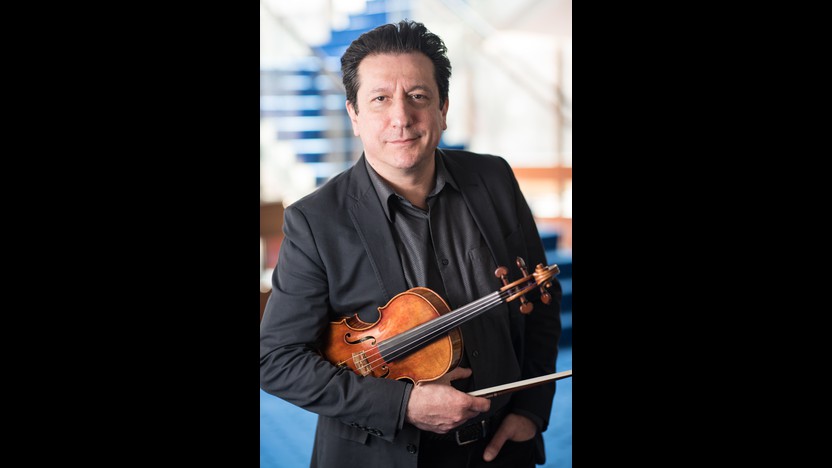 Antonio Vivaldi’s vast catalogue of concerti demonstrates an imaginative breadth that ranks him among the most important voices of the Baroque period, and certainly as the most influential Italian composer of his generation. The concerto medium—a form intended as a vehicle for soloistic virtuosity—was Vivaldi’s calling card, and developed into the quintessential Baroque genre largely by his hand. Vivaldi’s concerti were of consequential influence on no less a genius than Johann Sebastian Bach: When Bach first discovered the violin concerti of Vivaldi’s L’estro armonico, he was helplessly seduced by their high-flying virtuoso quality; it is no exaggeration to say that Bach’s Brandenburg Concertos—often held as the gold standard of Baroque concerti grossi—are unthinkable without the precedent of Vivaldi’s concerti.

The Concerto in B-flat Major for Violin, Cello, and Strings, RV 547, is one of the most widely beloved of Vivaldi’s concerti, and (outside of The Four Seasons and L’estro armonico) among the most frequently performed. It demonstrates all of those qualities that so enthralled Bach and others among Vivaldi’s contemporaries. The visceral thrust of the opening unison ritornello is likely to have turned some heads in the early eighteenth century. This music soon dissolves into an elegant cadence, prefacing a genteel dialogue between the violin—Vivaldi’s go-to virtuoso instrument (for which he wrote more than 200 solo concerti)—and cello, its unexpected sparring partner. The brief Andante is all mellifluous cantabile lyricism. Vivaldi takes full advantage of the soulful quality of his two solo instruments; violin and cello come to the foreground, as the orchestra provides just minimal harmonic support. The tenderness of this heartfelt utterance is offset by the jaunty, dance-like finale.

Igor Stravinsky’s oft-repeated wisecrack that “Vivaldi did not compose 400 concertos; he wrote the same concerto 400 times” is surely unfair. For if it is true that Vivaldi’s concerti have their share of common formal characteristics (illustrating a heady formula, it must be noted again, of Vivaldi’s own concoction), Stravinsky’s criticism fails to acknowledge the audacity of Vivaldi’s musical imagination within that form. The strongest of Vivaldi’s concerti combine rhythmic vitality with melodic invention; his understanding of instruments and keen dramatic instinct moreover place Vivaldi’s concerto oeuvre among the most thrilling glorifications of instrumental virtuosity in the repertoire to this day.

Armenian composer Tigran Mansurian ranks among his country’s most prominent musical figures. Alongside his compatriots Ervand Erkanian, Alexander Arutiunian, Alexander Adjemian, and Avet Terterian, Mansurian is recognized as a leading composer of the Soviet Armenian avant-garde. He is a professor of composition at the Yerevan State Conservatory of Music, and also holds the distinguished titles of Honoured Artist of Armenia and People’s Artist of Armenia.

While his music is rooted in Classical forms, Mansurian’s compositional vocabulary encompasses a wide range of influences, from serialism to Armenian folk music. “The medieval monody of Armenia plays a major role in my music,” he has said. “It is my cultural memory which helps me understand the present.” On the whole, Mansurian’s oeuvre betrays a gift for lyricism and an expansive fascination with sound, evident not only in his enchanting harmonic language and approach to orchestration (here, Debussy is another important influence), but further indulged by his research into extended instrumental techniques and electronic effects.

Mansurian’s Double Concerto, completed in 1978, is cast in two movements. Supporting the solo violin and cello, the composer notes that “the orchestra consists entirely of strings, an unusual limitation that vouchsafes a deliberate unity of timbre and sonority.” The first movement’s opening emphasizes this unity, focusing the listener’s ear on a single pitch—B-flat below middle C—which slowly changes color: introduced by the fourth viola alone, the sound diffuses through the rest of the viola section, then cellos, staggered violins (near the bottom of their range) and double bass (in its extreme high register), before finally the low strings expand the sonority downward. What follows sounds like a sinister lullaby, marked by a rocking, dotted-rhythm figure that will prove to be of great consequence. The solo cello and violin enter in turn, each imbued with a strikingly rhetorical expressivity, and both adopting the same dotted-rhythm motif; the orchestra goes silent, amplifying the desolation of each solo utterance.

The violin and cello function as the protagonists throughout the movement. The orchestra serves as a sonically ravishing Greek chorus, offering commentary on the soloists’ odyssey. The movement traverses rocky terrain, passing from brooding introspection to anxious frenzy. A critical juncture is signaled by the soloists’ manic obsession over the dotted-rhythm motif, soon transfigured by the full orchestra into grotesquerie. Mansurian employs a frightful spectrum of sonic effects: ferocious scratch tones and fraught glissandi. A quivering descent in the ensemble violins, voiced sul ponticello (bowed at the bridge, producing a thin, glassy sound), returns the music to the austerity of Concerto’s beginning. The movement ends in a breathtaking pianississimo.

The second movement begins with a hymn-like chorale in the cellos and bass—an evocative setting for the affecting entrance of the solo cello, to be played piano, caldamente (warmly), con sordino. The luminescence of this opening establishes a prayerful aura for the entirety of the movement. Here, Mansurian relinquishes pyrotechnic virtuosity in favor of sustained endurance and a poetic sense of line.

Near the work’s conclusion, a specter of the first movement appears: Mansurian recalls the chameleonic B-flat from which the Concerto emerged, as well as the dotted-rhythm motif. The music turns suddenly ominous. It is as though the composer warns us that the soft glow of this second movement offers but fleeting respite from the arduous trek that came before. While the stillness of the Largo sostenuto might have the last word within this Concerto’s two-movement structure, the perils manifested in the first movement await us as soon as we exit the mystical, musical realm of Mansurian’s creation and re-enter the world beyond.