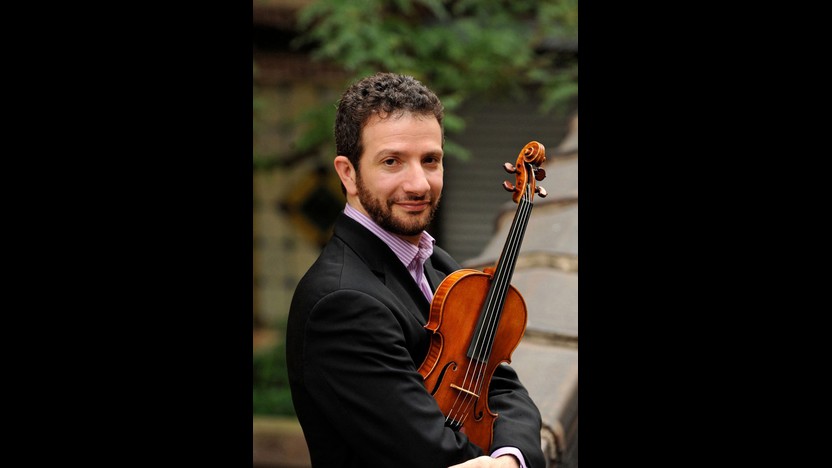 Bach probably composed his two extant violin concertos around 1730, not long after he agreed to lead the Collegium Musicum in Leipzig. This talented amateur group gave weekly performances, often in the informal atmosphere of a coffeehouse, providing Bach an outlet for secular music that would not have entered his primary duties preparing music for church services. The violin concertos in A minor and E major were among the works that Bach recast in the late-1730s as keyboard concertos, also intended for the Collegium Musicum. The six keyboard concertos provide evidence that there were likely more concertos for violin, but only the two solo concertos and a double violin concerto in D minor have survived.

Bach borrowed his template for the violin concertos from earlier Italian composers, especially Vivaldi. The E-major Concerto begins with three chords and a pause—a stock opening that can be found in some two dozen of Vivaldi’s concertos—but the ensuing treatment is classic Bach. The recognizable figure of a rising triad spread across three steady beats cascades from voice to voice and passes through a range of keys, making its most striking arrival in the ominous key of C-sharp minor. The journey to that contrasting key area proves even more significant when it turns out to be the home key of the Adagio, a poignant lament the concentrates the richest countermelodies in the lower strings. The Allegro assai finale adheres to the classic ritornello format, in which tutti statements return after each exploratory episode from the soloist.

German composer Johann Sebastian Bach’s Brandenburg Concerto No. 5 was written for the inauguration of a new and elaborate two-manual (two-keyboard) harpsichord built by Michael Mietke. As part of his job as the music director for the court of Leopold, the Prince of Anhalt-Cöthen, Bach was responsible for negotiating the design of the instrument with Mietke in Berlin. It was on one such trip to Berlin in 1719 that Bach met Christian Ludwig, the Margrave of Brandenburg-Schwedt to whom he would ultimately send the collection of six Brandenburg Concertos. When the new harpsichord arrived in Cöthen, it was only fitting for Bach to write a new work to feature the instrument.

Brandenburg Concerto No. 5 is scored for a solo concertino group of harpsichord, flute, and violin, which is accompanied by a ripieno of strings and basso continuo (a bass line played by a combination of bowed bass instruments and/or lute, theorbo, and harpsichord). This was one of the first orchestral pieces to elevate the harpsichord from the basso continuo section to the soloist’s spotlight. Throughout the piece, the harpsichord functions as both a virtuosic member of the concertino as well as an accompanying instrument in the basso continuo section. After this concerto, Bach, his sons, and their contemporaries wrote many solo harpsichord concertos, thus giving birth to a new genre.

The fifth Brandenburg concerto opens with a cheerful movement in the expected ritornello form. Ritornello, which means “return,” refers to the opening music in a movement that returns in alternation with a variety of solo passages. While each of the three solo instruments in this concerto has moments of virtuosity, the harpsichord part is especially spectacular. Rapid passagework of scales and arpeggios sparkles against the backdrop of the orchestral accompaniment. Unlike any previous concerto, this movement includes an exceptionally lengthy, written-out harpsichord cadenza, which was an excellent way for Bach to show off the new, state-of-the-art instrument in Cöthen.

Marked as “Affettuoso,” which is rare in Bach’s scores, the second movement is an intimate conversation between the flute, violin, and harpsichord. Sighing motives and minor tonal centers are the defining characteristics of this movement. Like in the fourth concerto, Bach merges fugue and ritornello form into a simultaneously uplifting and contrapuntally complex third movement. Fugue, which means “flight” refers to a compositional process in which one instrument states a melodic subject, which is then repeated and “chased” in different voices throughout the movement. This driving movement is in compound meter, contributing to its sense of forward motion.

Bach probably composed the Orchestral Suite No. 1 during his early years in Leipzig, when he first started participating with the Collegium Musicum, an ensemble mainly comprised of university students. With most concerts held at a coffee house, this amateur ensemble provided Bach relief from his rigid church position, letting him experiment with secular music like the four surviving Orchestral Suites inspired by French dance music.

Suites in the French style had become fashionable in Germany, where such a work would have been described as an Ouverture (to use the French spelling), taking the name from the substantial opening movement. The subsequent movements employed dance styles popularized during the reign of Louis XIV, an avid dancer himself. Orchestral suites by Bach and his contemporaries were not intended to accompany actual dancing, but the familiar rhythms and patterns would have contributed to their entertainment value.

This unconducted program features four of Bach’s most cherished masterpieces, including two of his beloved Brandenburg Concertos. At the center of the program is the composer’s Second Violin Concerto, featuring SPCO Concertmaster Steven Copes as soloist. Continuing our season-long exploration of Bach’s complete Orchestral Suites, this program closes with the Orchestral Suite No. 1.